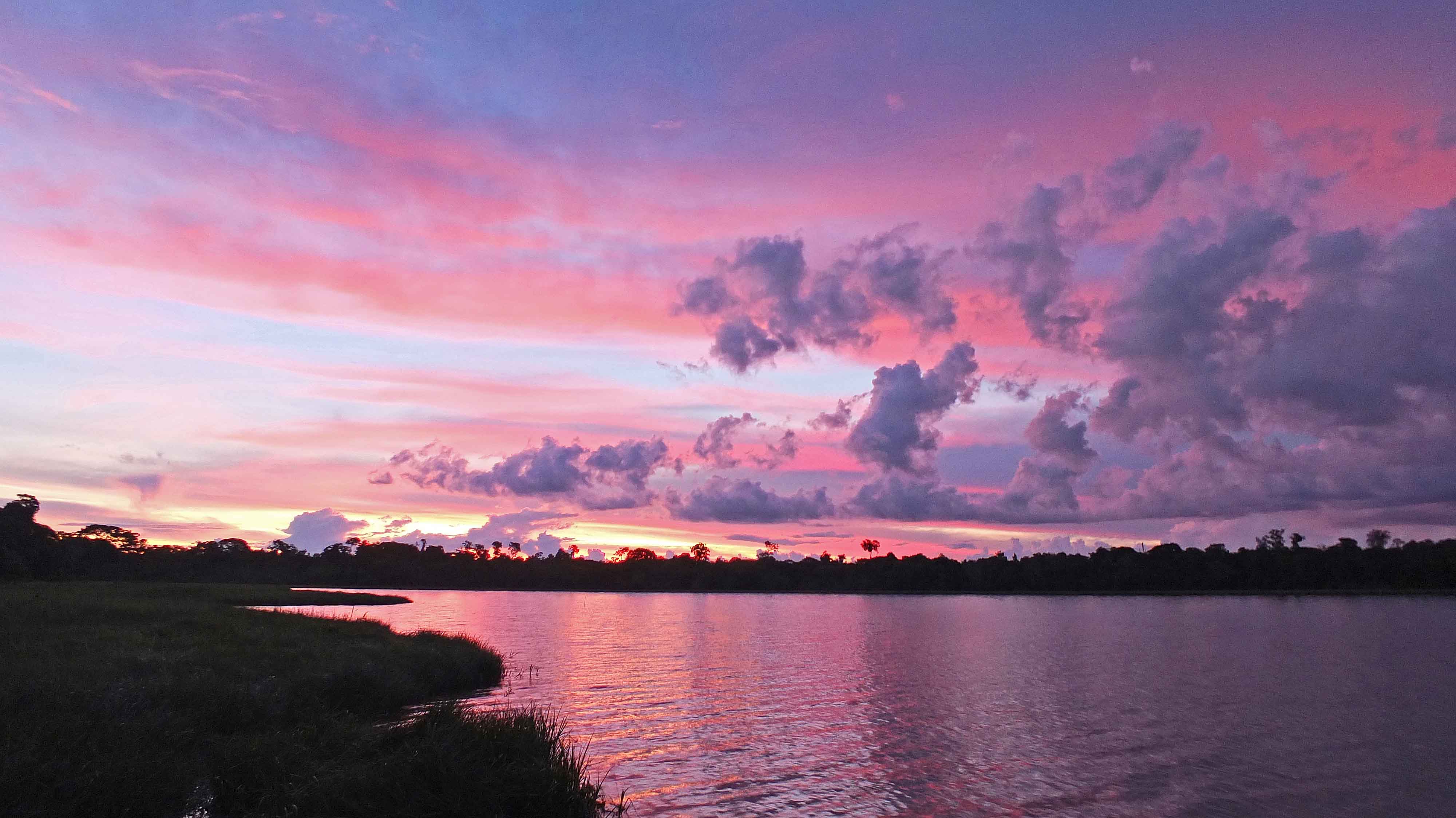 Where the Anaconda roars.
At the edge of the Amazonian rainforest, in Bolivia near a town called Riberalta is a lake called San Jose. This lake is inside the Aquicuana reserve.

It's a tranquil place. No electricity, no internet, no phones, just nature. Nature consists of lots and lots of different birds in the air, strange mammals in the jungle and a variety of dangerous beasts in the water.
The indigenous people warned me not to go swimming because of caimans and piranhas. They also told me a fabulous story of the biggest snake in the world. They said, 'Before the big rain comes sometimes the anaconda roars!' They call it 'Brama' and shudder.

I spent a couple of days by the lake. The rainy season started with plenty of thunder and lightning. Sadly, the anaconda didn't roar for me.

Eventually we arrived in Trinidad.
Trinidad is a small town right in the middle of the Pantanal. In the city center I found this cute couple enjoying the view from their nest high up in a dead tree. 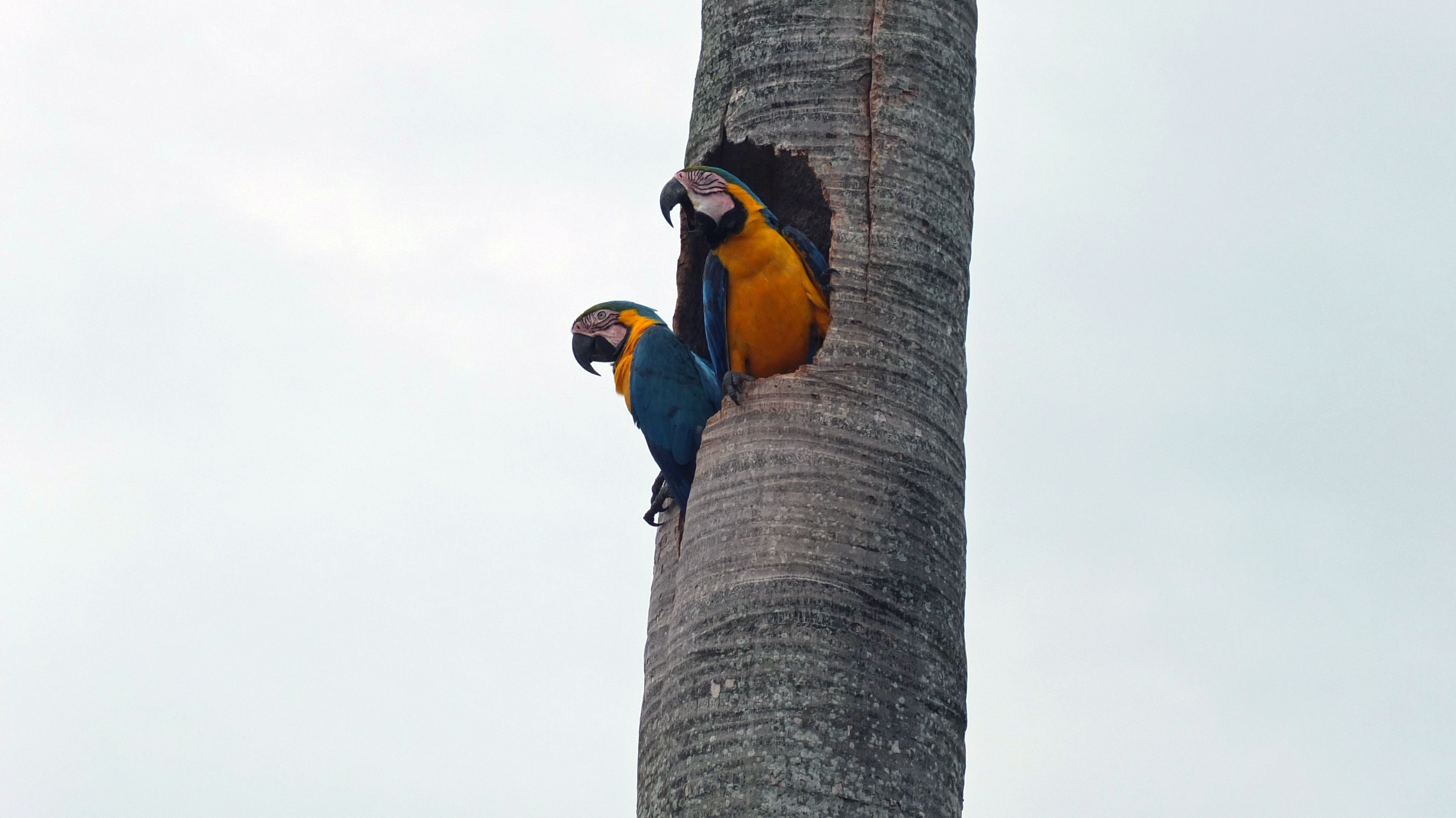 I had to see a bit more of the surrounding area and took a motorbike taxi to Puerto Balivián, where one can hire a boat and explore the wetland. The amount of wild live is unbelievable. Lots and lots of birds everywhere. I even spotted a capybara in the water. Only its head was visible. The boat man tried to move us closer but the giant (about the size of a pig) rodent bolted, demonstrating a surprising agility. I got a brief glimpse before it disappeared but no photo. 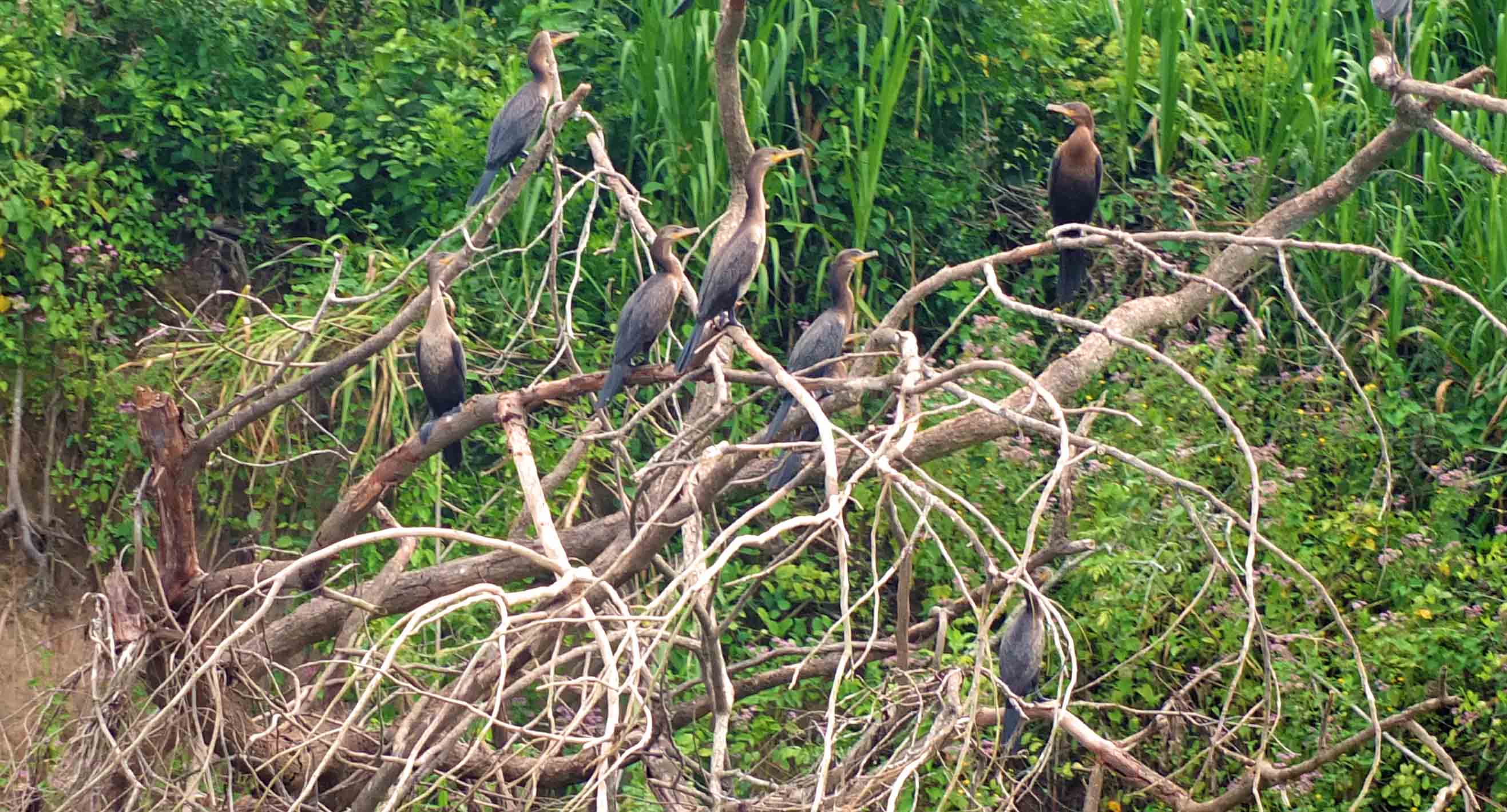 I did take a photo of a toucan but it was an accident. There was something high up in a tree and I took a quick photo, to be examined later. By that time the mosquitoes where getting to me.

In the Pantanal there is life everywhere.
On land if one stops moving, one interrupts someone's business. Usually it's ant business. But it takes you a while to notice the ants crawling up your legs because some spider decided too use you as a anchor pole for its net and little flies are trying to crawl into your nostrils, while butterflies dazzle you with their beauty and mosquitoes suck your blood. 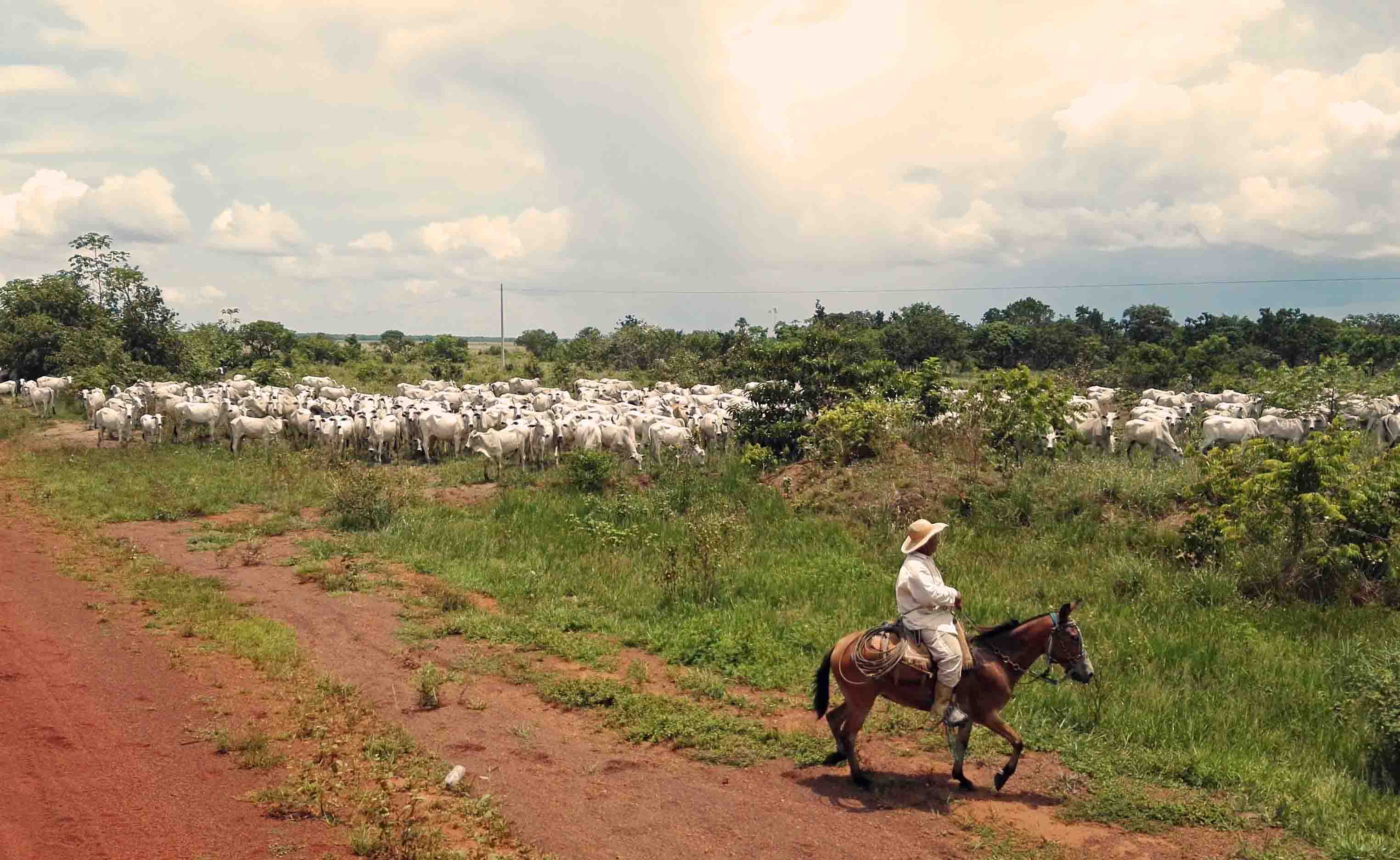 I left Riberalta a week ago and went to Trinidad, about 450 km further south. This is the distance a bird would have to fly. In a bus it's much farther and takes about 12 hours. Also, it's a dirt road full of potholes, stones and the occasional wildlife. It was a decent bus with lots of leg space. On a normal road this would be luxury.
On this track however, one got bounced and thrown about. We experienced 2 interruptions. The first was a bunch of cows herded by their gauchos (Actually, in Bolivia they are called Peones ). The second was a river. Everybody needed to get off while the bus crossed the river.

I'm in Cochabamba, Bolivia, a small, but modern town at the foot hills of the Andes. The hotel I am staying in is at about 2550 meters above sea level.
Here, for the first time in months I met European tourists and travellers. It's nice to exchange some travel experiences or just talk to like minded people. One day an English guy turned up who looked like he'd been mauled by some vicious cat. I asked him, how did you manage to do this? 'I just got mugged' he replied.
Here is what happened, he went up to the statue of Jesus Christ (2nd biggest in the world) at the top of a nearby hill and sat down for a moment to catch his breath when some arsehole rushed up to him and threatened to stick a knife into his ribs. He had to surrender his bag containing a laptop, a phone, his passport, some credit cards and cash. The thug turned and ran down the hill and the English guy, stirred with rage, got up and chased the thief through a field of cacti. To cut a long story short, he recovered his passport and the credit cards but lost the electronics and of course the cash.
Next, the traveler (let's call him John) went to the police and told them, in broken Spanish, what had happened. They immediately jumped into a 4wheel drive and tried to find the thief but didn't succeed.
In the meantime John realized he needed to make a declaration to the police to be able to claim the insurance. He tried to explain this to the cops who quickly pointed out, he would need to pay 20 Bolivianos (about € 2.50) before this could be done. John tried to remind them he'd just been robbed and had no money but the police didn't understand him anymore.
The next day John and myself went to the cop shop and tried to do the necessary declaration. We went into an office where 2 coppers were watching TV. They told us the fee needed to be paid into a bank account and no, we could not pay it right here. Off we went again. Once John paid the fee we returned and showed the receipt.
Reluctantly, one of the 2 coppers took John's declaration and passport details. When we were handed the print out we noticed John's surname was now 'British Citizen' and some of the laptop details were wrong. I politely asked the police to rectify the errors but they refused. I reminded them, my friend is the victim here and isn't it the police responsibility to help? Eventually they agreed to make the required changes on Thursday (it was Tuesday)
if another 20 Bolivianos were paid. 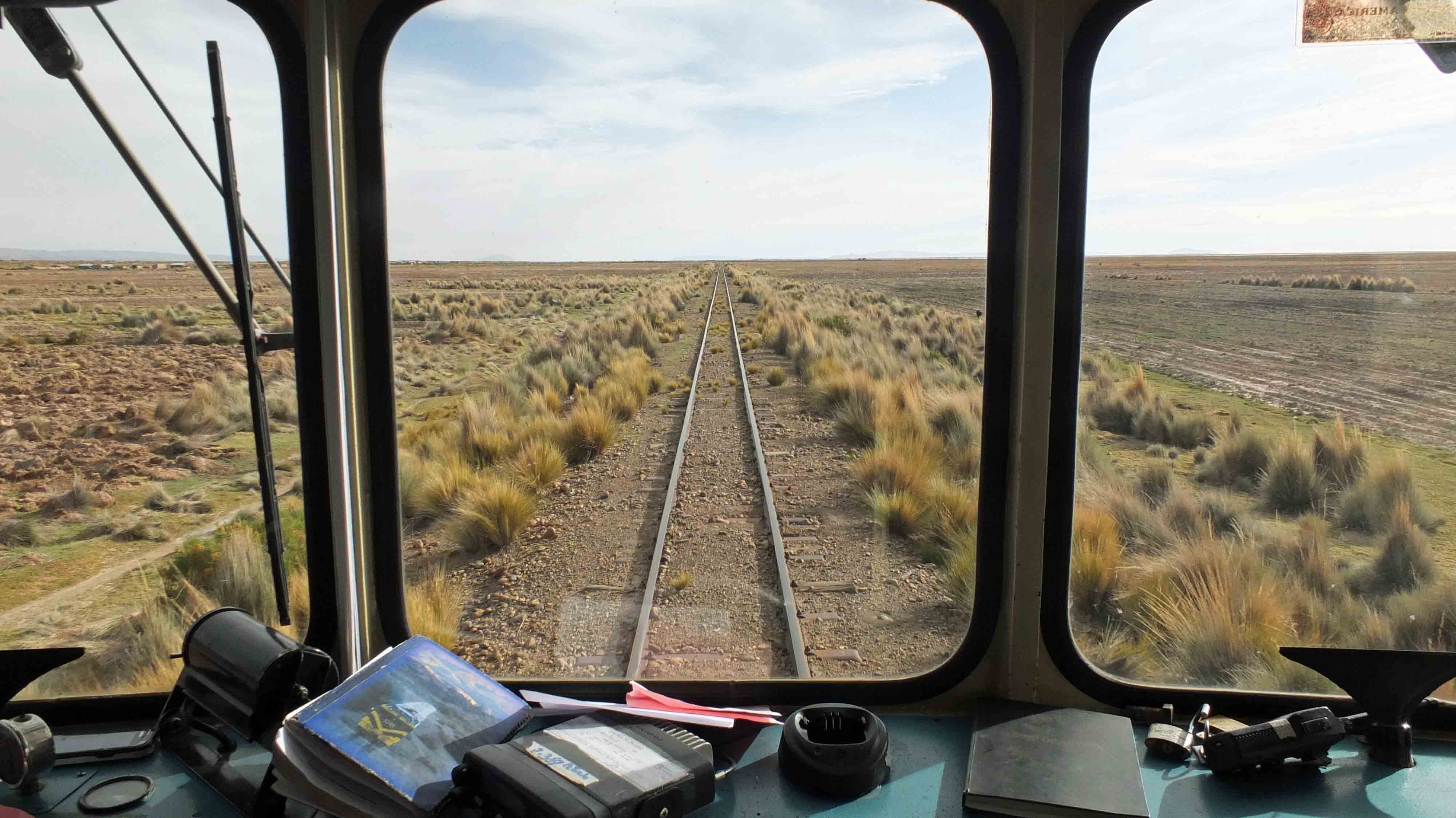 I took a bus to Oruru and arrived just in time to catch a train to Uyuni. When they saw me coming I was ushered into the train. Once in the train they asked for my ticket. I said, 'Yes I need one, please'. They ushered me out of the train again but were nice enough to wait for me while I bought my ticket.
And the journey began.
First I need to explain, Oruru is on the Altiplano. A huge flat area about 3500 meters above sea level, connecting Bolivia, Chile and Peru. It's part of the Andes. To get to this Altiplano one first needs to climb a mountain range of about 4500 meters height and then descent to this vast plateau.
The train -which only rides twice a week- is a 2 wagon set up. The first wagon contains the engine and a number of tourists. In the 2nd wagon are all the locals.
It's a 7 hour, non-stop journey. Sometimes trucks and cars can be seen as they overtake us on a road going parallel to the track. The train is not fast but it rumbles and rocks a lot.
Lamas, alpacas, sheep and cows watch us passing. An occasional dog chases us just for the hell of it. I didn't see any fences!
We arrived in Uyuni at 9:20 pm, as promised. Punctuality is extremely rare in this part of the world.

Uyuni seems to be the most touristy place in Bolivia. People come from all over the world to see the Salar de Uyuni, the highest, largest (more than 10000sqkm) and 'flattest' area on earth. In fact, it is so flat, GPS satellites use this place to calibrate themselves.
And it's cold! At night, temperatures below zero are not uncommon. In daytime it can get warm but not much.
With a little rain the Salar turns into a giant mirror, creating the most amazing photo-ops.
Lucky as I am, it hadn't rained in month. Therefore I can't stun you with spectacular photography. Above are my rather 'boring' photos. Do an an image search for Salar de Uyuni and be awed. 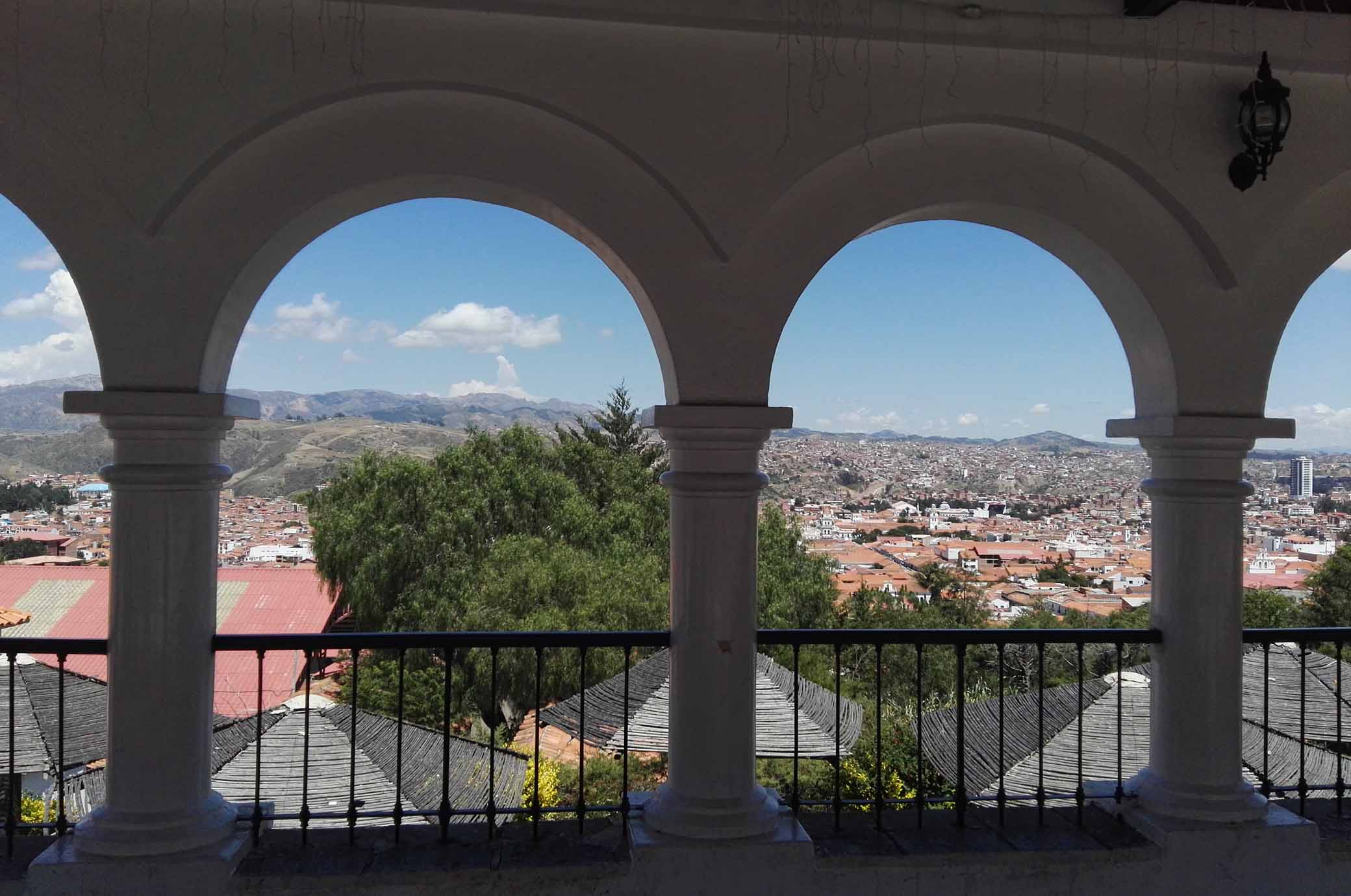 After 2 days of gasping for air I moved on to Sucre (2800 m) the constitutional capital of Bolivia. It's a beautiful city. All the buildings are shiny white. In Sucre one really appreciates the patio culture which means there aren't any terraces on the side-walk.

But the most spectacular thing in Sucre is the world's largest accumulation of dinosaur footprints.
This 1.5 km long mountain side is covered with footprints. Of course 60 million years ago this wasn't vertical but a flat area, probably leading to a lake. Then the tectonic plates moved and squeezed the continent which moved the whole area into a vertical position. The prints were discovered by accident. The place is actually a stone quarry, hence all the trucks. 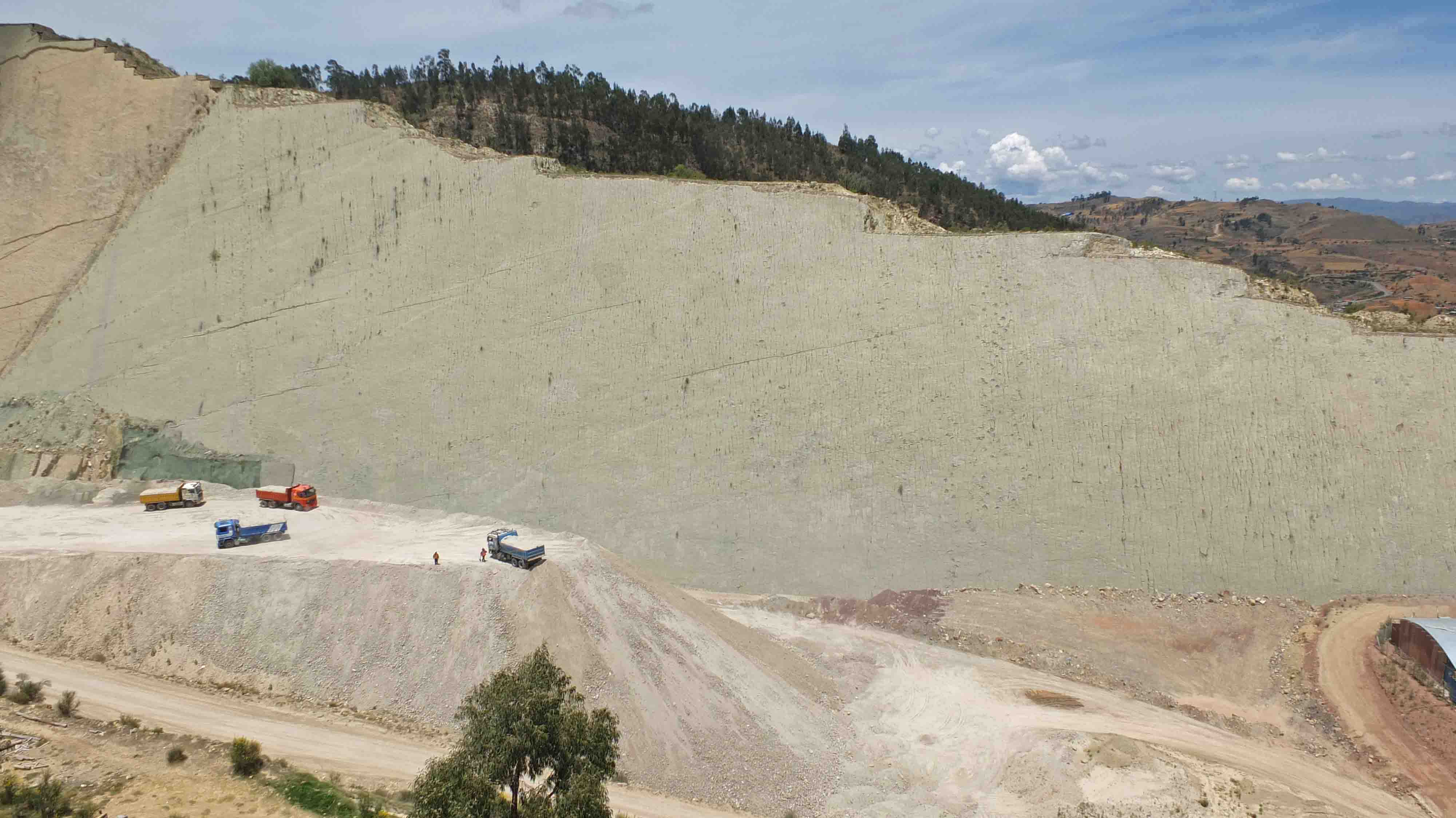 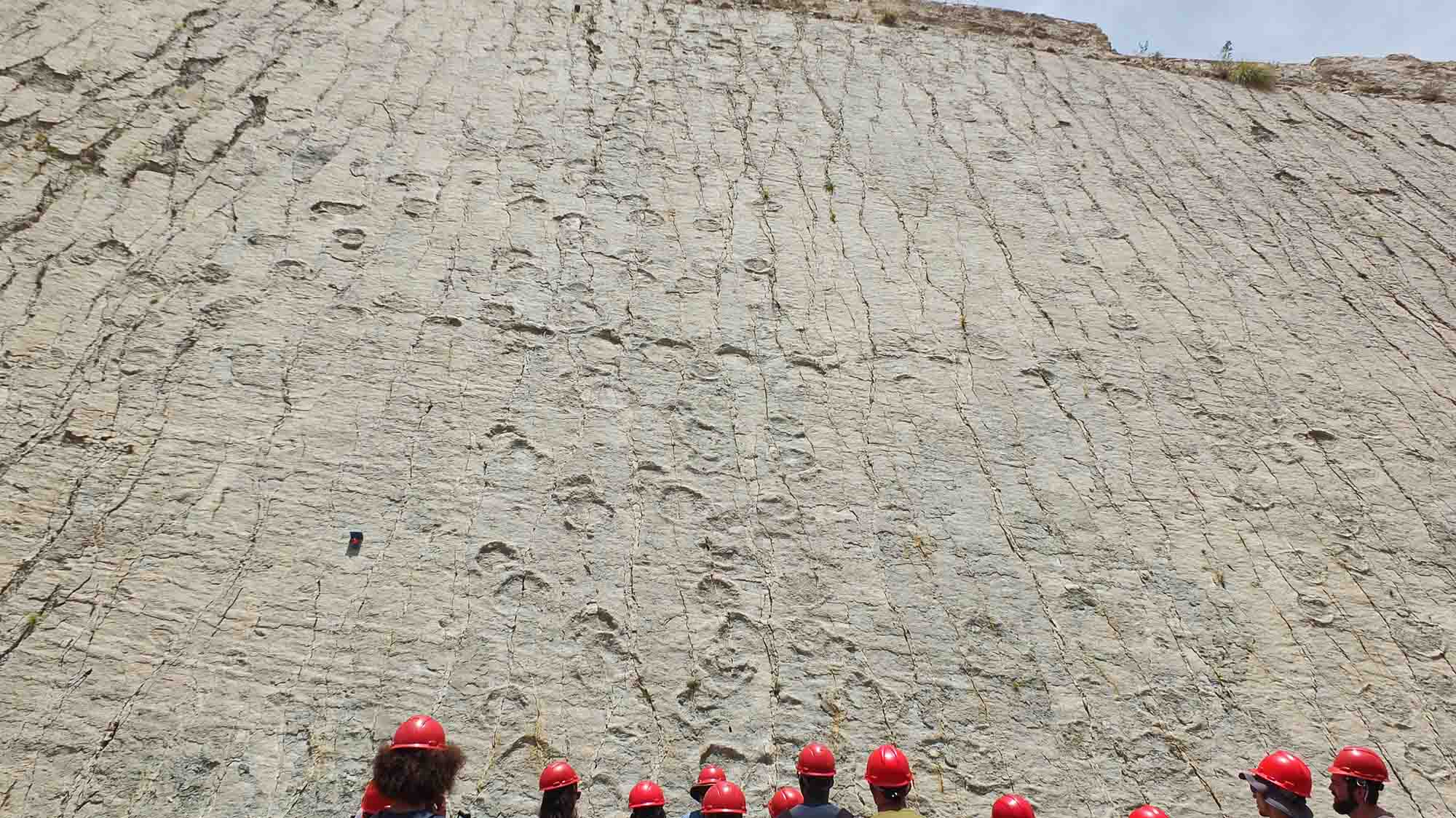 To the left (above on mobile) you can view a section of the 'wall'. The dinosaur prints are clearly visible.
Above is a full view of the now vertical lake plateau. 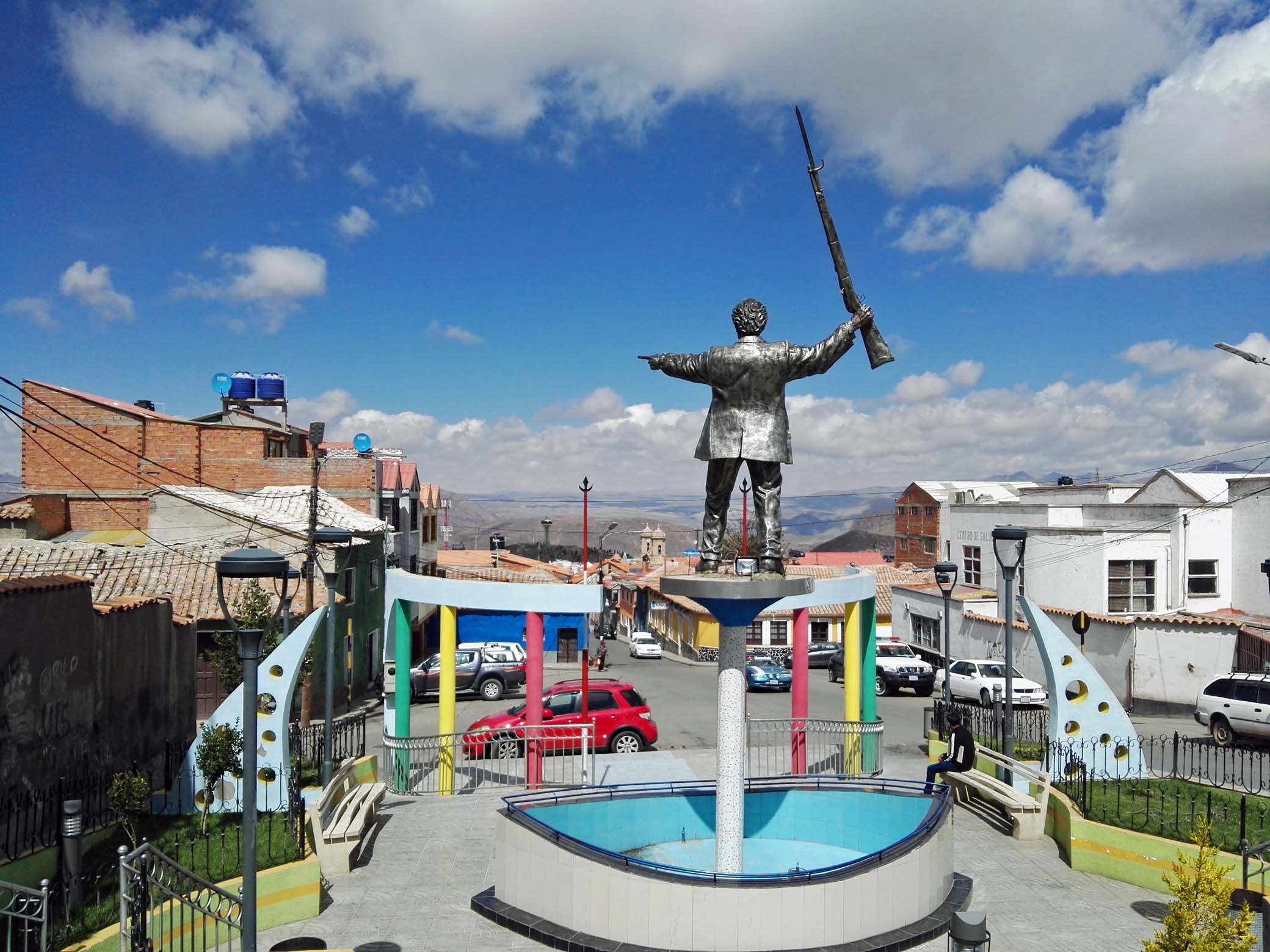 From Uyuni I moved to Potosi (at 4199 m) it was only a 4 hour bus ride but the decreased amount of oxygen is definitely notable. Also, when I arrived there was a national strike happening and it was impossible to get a taxi. Had to drag my gear up a hill which left me totally exhausted.

Potosi is a very pretty, 450 year old town with lots of little streets. The town exists because of silver. I went to see a museum which told me me all about the Spanish atrocities while mining silver and making silver coins.
Like all colonial powers, they behaved like right bastards. I won't get into it because it's very depressing. What does need to be mentioned is, the Spaniards used thousands of African slaves and indigenous people to extract 40,000 tons of silver from the Potosi silver mine. It made Spain immensely rich and paid for the wars against the English and Dutch.

I did find a nice little hotel though called the Koala Den.

I asked the owner how he came up with this name. He told me he saw Koalas on TV chewing eucalyptus which reminded him of the miners chewing Coca leaves. (Yes, they are still extracting silver, not so much any more but the miners get paid nowadays)

I spent quite some time in Sucre. I really like the city. After 2 weeks it was time to move on though. But it was really annoying to learn, there are no daytime buses to the capital La Paz! I really hate traveling at night. What's the point? One can't see anything. So I searched for alternatives. There was only one other option, go back to Potosi and there change onto a different bus to Oruro. I passed through Oruro before. I spent about 10 minutes there to get on a train (see above 5th of December)
From the train I saw thousands of Flamingos but because the train track is about a hundred years old the train was moving a lot and I didn't manage to take a decent photo. So here was my chance to get a decent shot. What do you think? 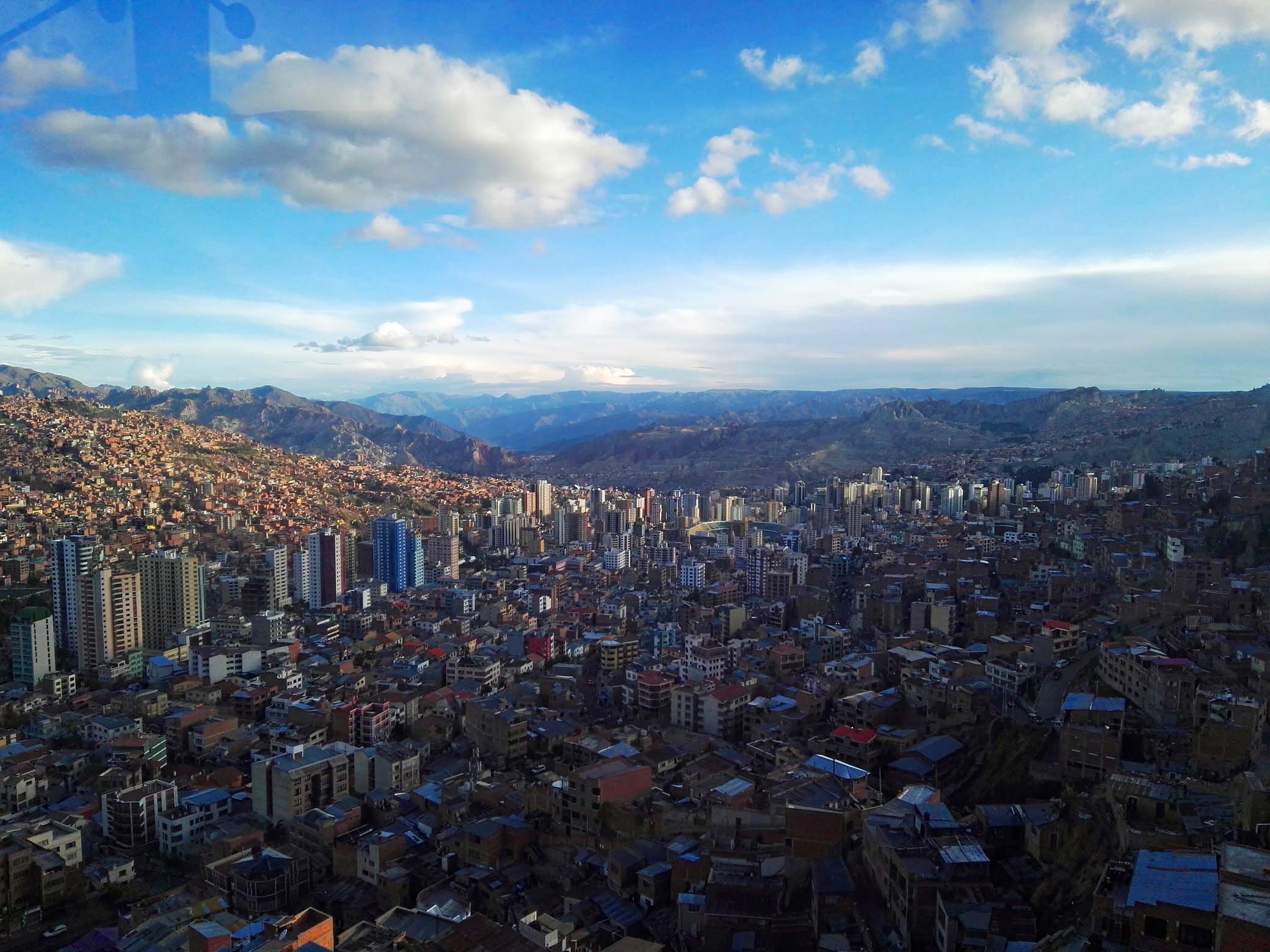 I only spent 2 days in Oruro and then moved on to La Paz, the capital of Bolivia. What a city!
Actually it is 2 cities. La Paz(at +/- 3640 meters) and El Alto (at 4150 meters).
The 2 cities have grown into one and are connected by a common public transport system. This system is unique in the world.
You won't believe it, they are actually using cable cars.

Here is the layout of the network I found online.

No such map is available at any of the stations but many helpful people are employed and happy to point you in the right direction.

So join me on a photographic journey across/above La Paz.

If you click on any of the cable car photos below it will open in a new window and you can zoom in and move around. 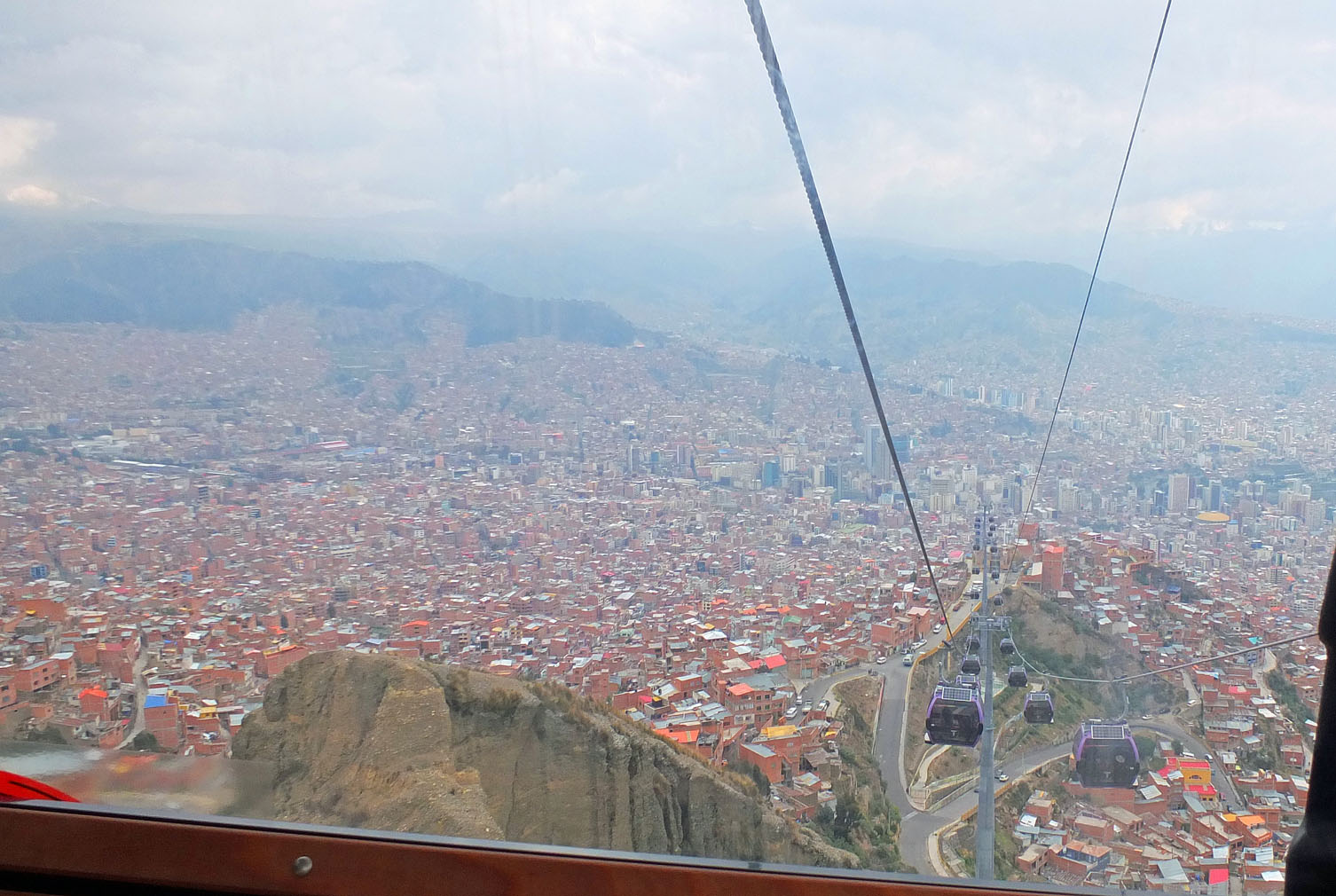 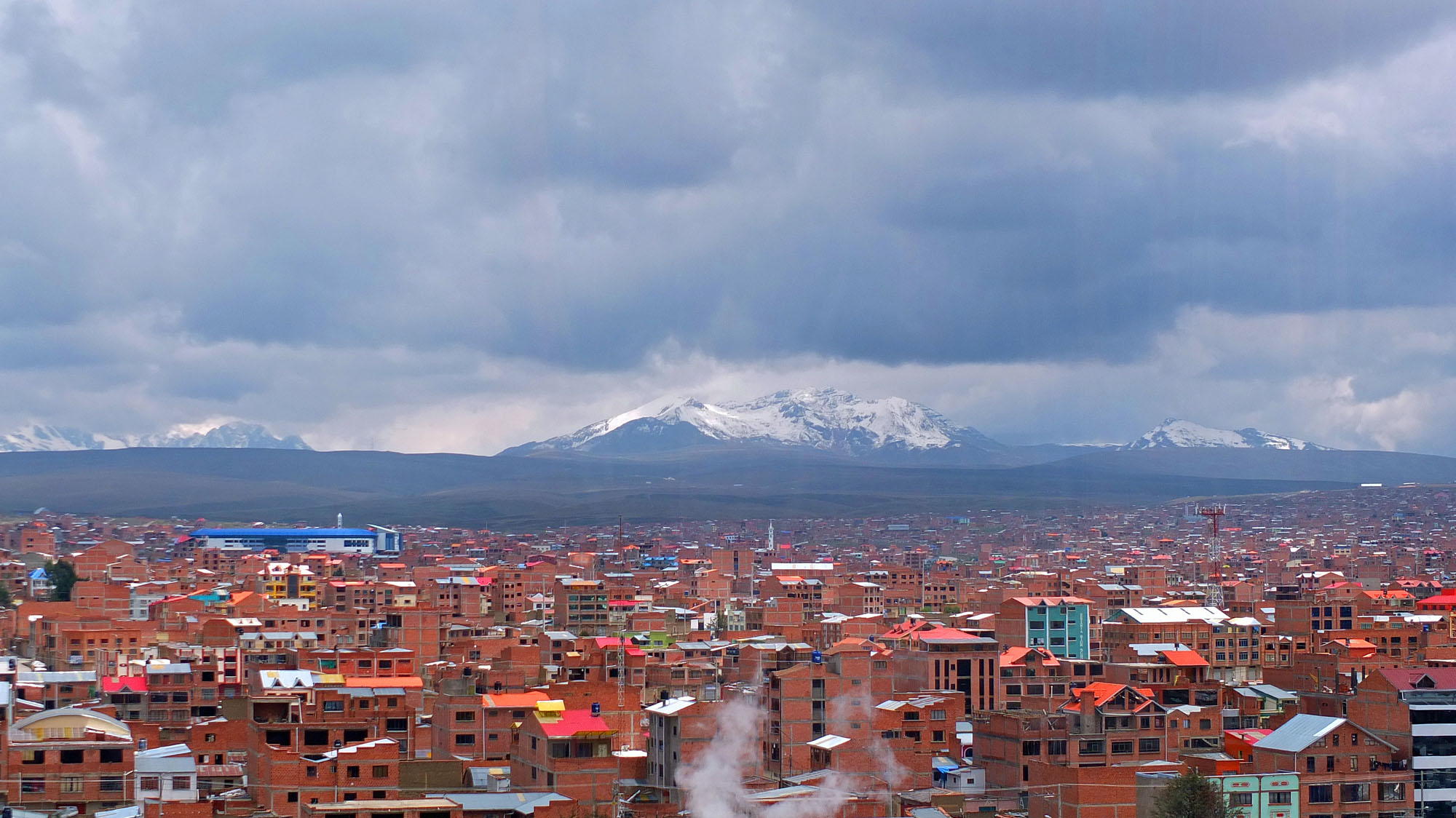 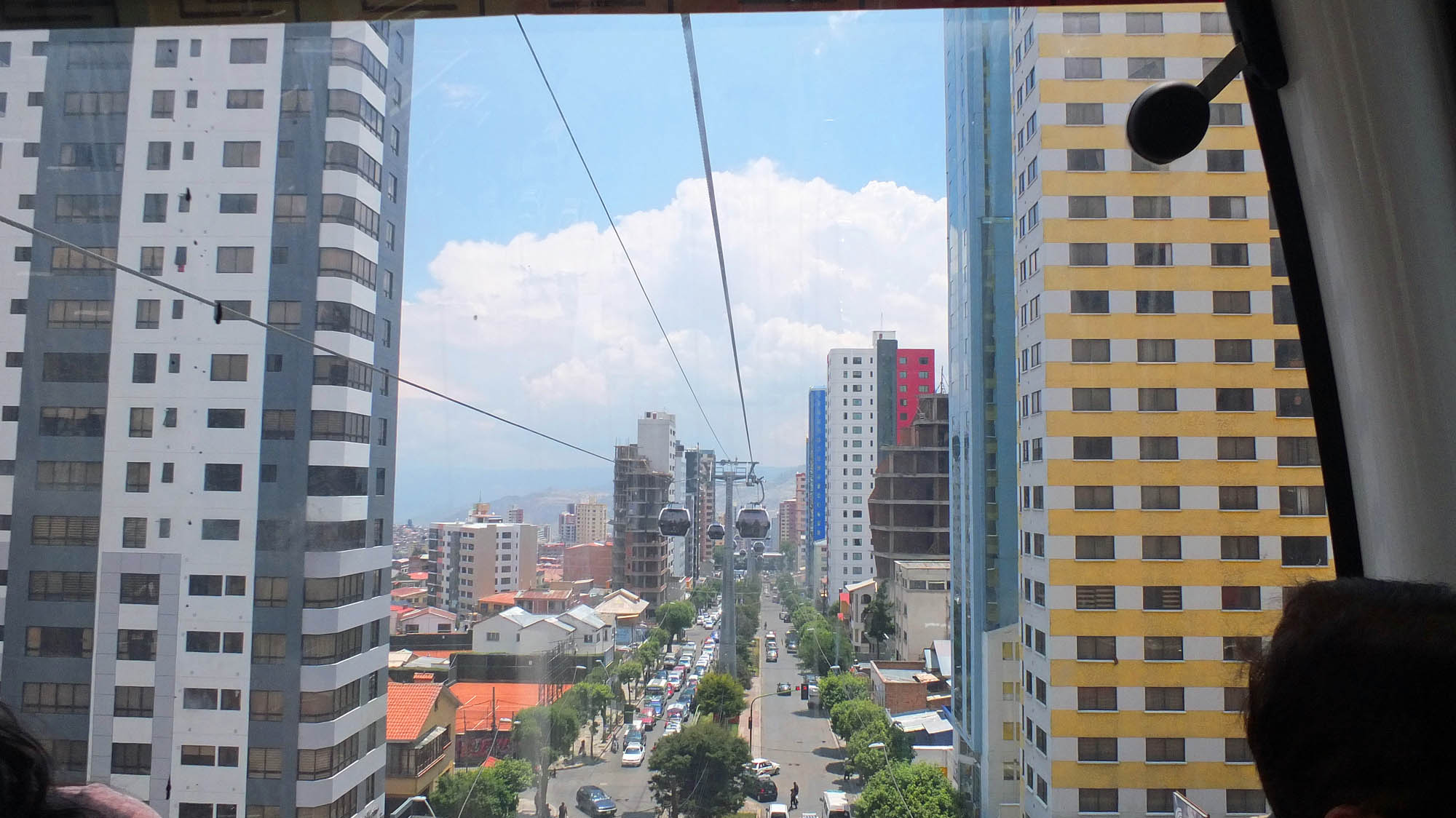 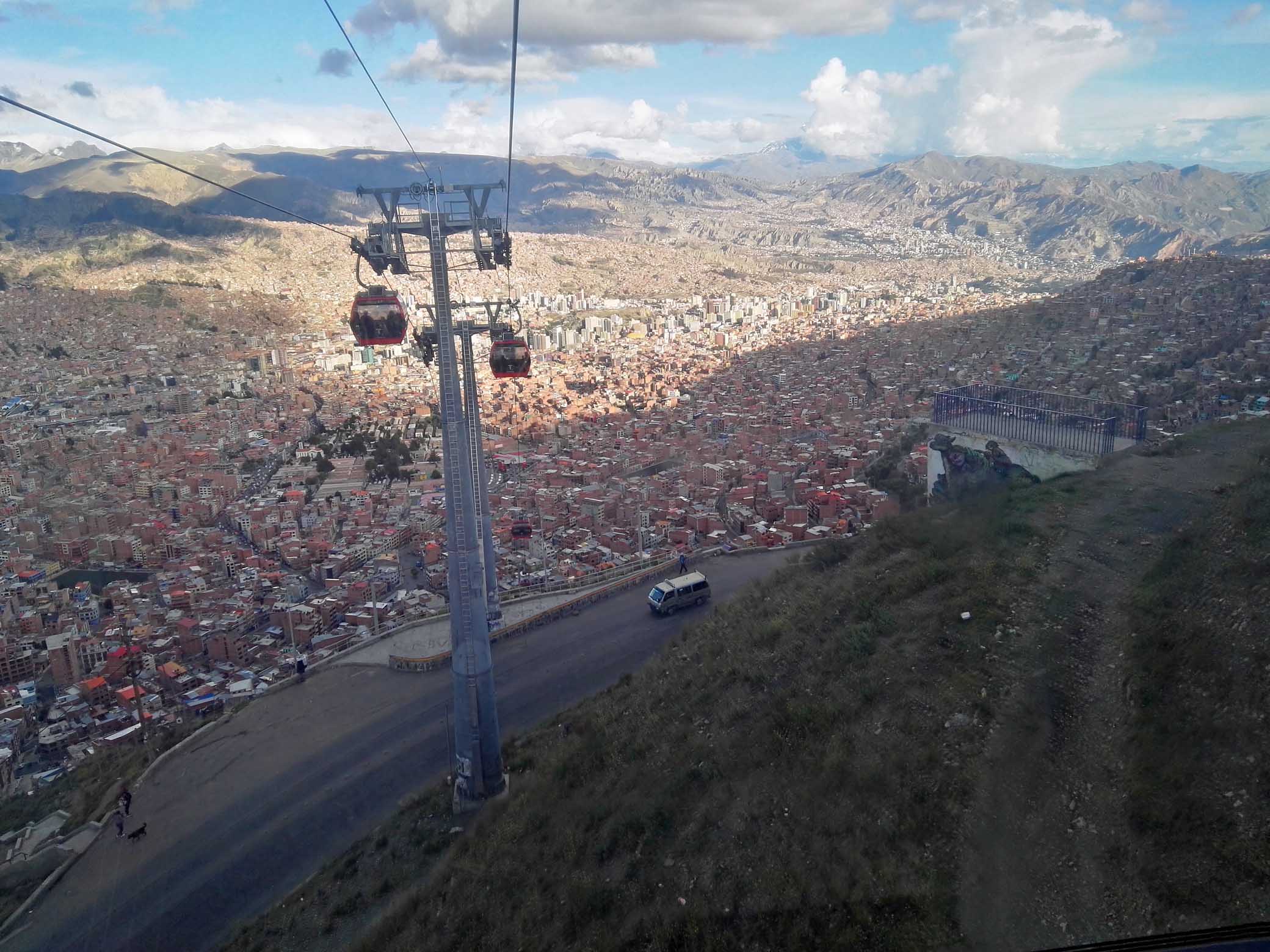