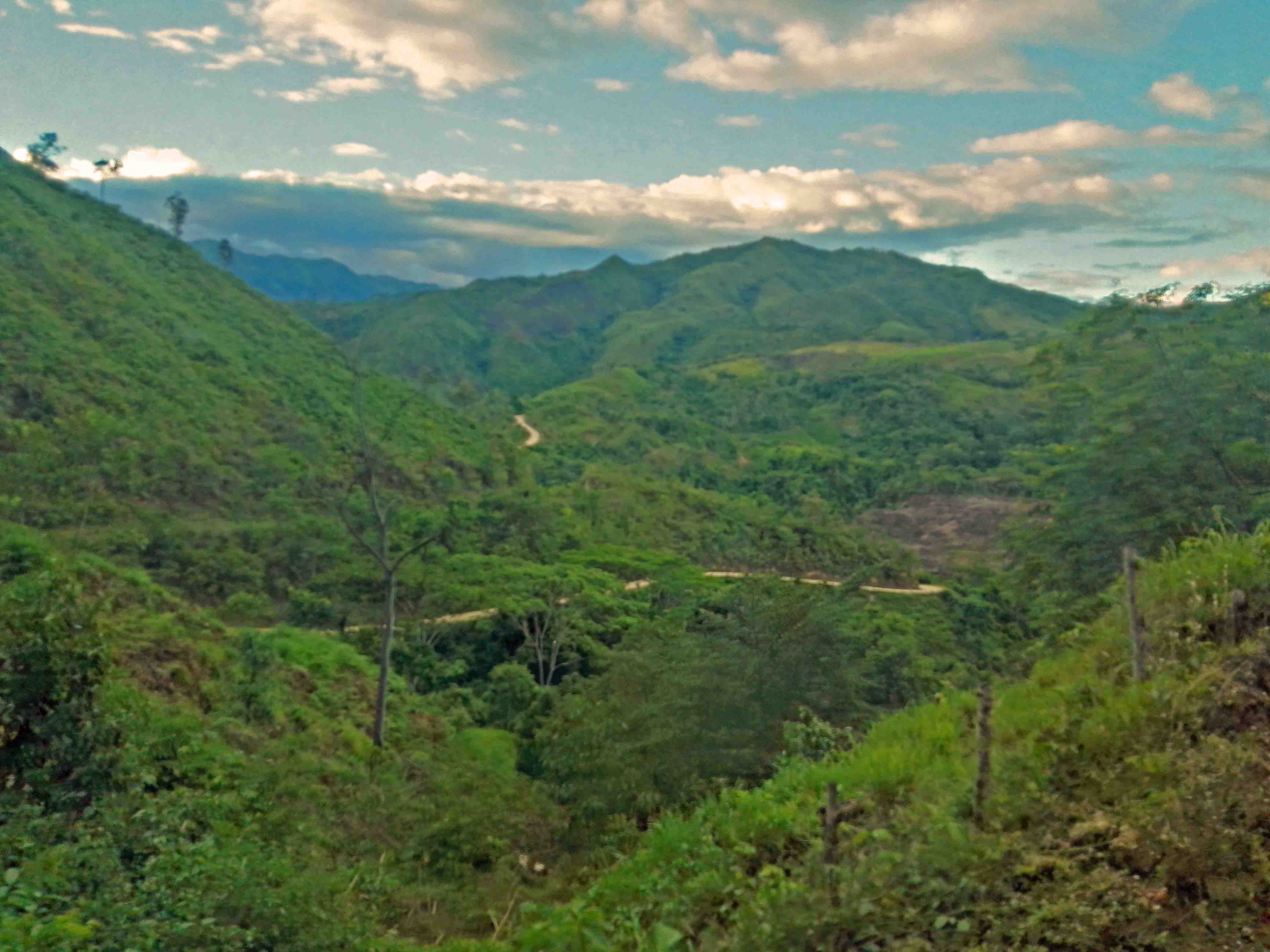 I think I am done with Peru.
Trying to find out how and where to go I went to the so called Bus Terminal. It's a walled square filled with lots of blaring TVs, some vans, a few cars and a couple of buses. As soon as the drivers of the various vehicles saw me they start shouting 'Hey, hey, hey' it reminded me of the seagulls in Finding Nemo and put a smile on my face.

The ticket offices are along the wall, where all the TVs are blaring. I asked for Loja, a not so far away town I had spotted on the map. The girl at the counter advised me, there is a bus leaving everyday at 3pm and it should arrive around 7pm.
Perfect, I think. That gives me plenty of time to break my fast, have a shower and pack my bag.
That's exactly what I did the next morning (and I had a walk, too). At around 12pm I was back at the ticket office. The girl remembered me but to make sure I said,
'There is a bus going to Loja today at 3?'
'Si, 23 Soles (Peruvian money about 6 Euros) por favour' she said.
I paid and since I had plenty of time, walked to the nearest coffee shop. One of the girls working there asked me if I just came from Ecuador. I explained I was planning on going there later on today and took the opportunity to ask if it really only takes 4 hours to Loja.
'Nooo!' she replied. 'You'll get there around midnight.'
I took out my ticket and stared at it.
It's not really a ticket. Just a piece of printed paper saying: Name.... Going to ….paid....... and the name of the Company. In the section Going to it said 'Zumba'
I asked the girl what Zumba is.
'A small village half way to Loja', I am told.
I paid my coffee and rushed back to the bus stop to ask the girl there why she sold me a ticket to a different town.
'You said Zumba!' and smiled.
I pointed out I never heard of a place called Zumba!
'Oh well, we just change it. But you have to pay extra!'
'Sigh! Ok then.' I replied, knowing full well there is no point in any further discussion.

The bus is actually on time. I get in and find it's completely empty.
The seats behind the driver usually have some extra leg space and I sit down by the window.
A few minutes later 2 women and a child appear. They look around. The bus is still totally empty. One rather large woman sit down next to me and the other one, with the child, right behind me.
When the conductor passes, the women starts a conversation about the possibility of a discount on the fare, since they are 2 and a child. She is told the fare is 19.50 and half that for the child before the man disappears again.
She gets her phone out, opens the calculator and I can see she types 19.50 +19.50 + and stops.
'What is the half of 19.50' I can feel her thinking. She puts the phone away again.
A moment later the conductor comes back. He apparently had the same problem because he tells her,
'Let's make it 18 dollars. So it's 9 for the child'
She pays and everybody is happy.
The journey is nice! The bus is driving on a narrow dirt road high up in the mountains. It's green all around. I did wonder what happened to all the trees (there weren't any) but after all the grey desert I'd just left, it was really pleasant to see some green.

Loja was a surprise! The first town in a long time which appeared to be clean. In fact it felt a bit like a European town. That's why I didn't take any photos.

Next town was Cuenca.
Cuenca at first site felt even more like a European town, mostly because it has a tram.
Yes, you read correctly 'One' tram!

And they were still busy training people to drive that thing, while being surrounded by coppers. There was a lot of security everywhere, though.
But I did meet some nice and interesting people here.
Also the place I stayed in, called Posada Gran Colombia was really nice! 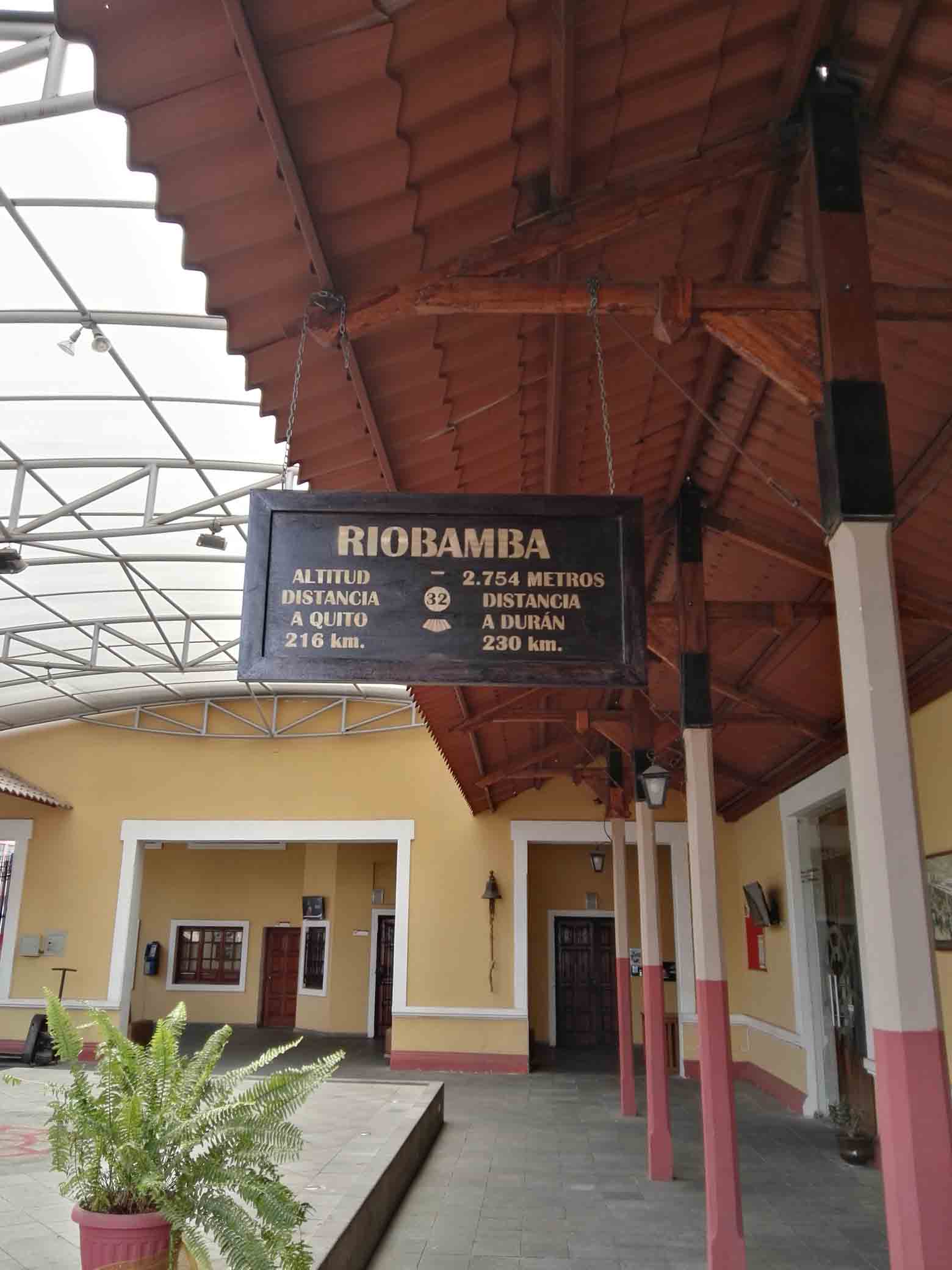 I moved on to Riobamba.
Here I saw a train station. That is very unusual in South America as I pointed out previously.
What is even more unusual is seeing the state of the tracks and the station. The word 'Immaculate' comes to mind.
Upon further inquiry I learned, it only runs twice a week and is extremely expensive. If you have money to waste this might be the thing for you.
Basically, this train has been reduced to a tourist gimmick as a result of general incompetence and corruption.

I did see an interesting mural near the cathedral, though. It sort of shows the history of Ecuador, starting with an image of 'primitive' indigenous people scarifying one of their own. A little further to the right they are surrendering to the 'glorious' Spaniards' and their priests. Then the uprising of Jose de Sucre is depicted followed by -what I think is- Simon Bolivar melting the chains of Spanish colonisation. At the far right seems to be the fabulous riches corrupt politician reap now.
What it doesn't show for example, is the Spanish meeting with the Inca leader Atahualpa who refused to become catholic. They executed him by strangulation.
How very Christian of them 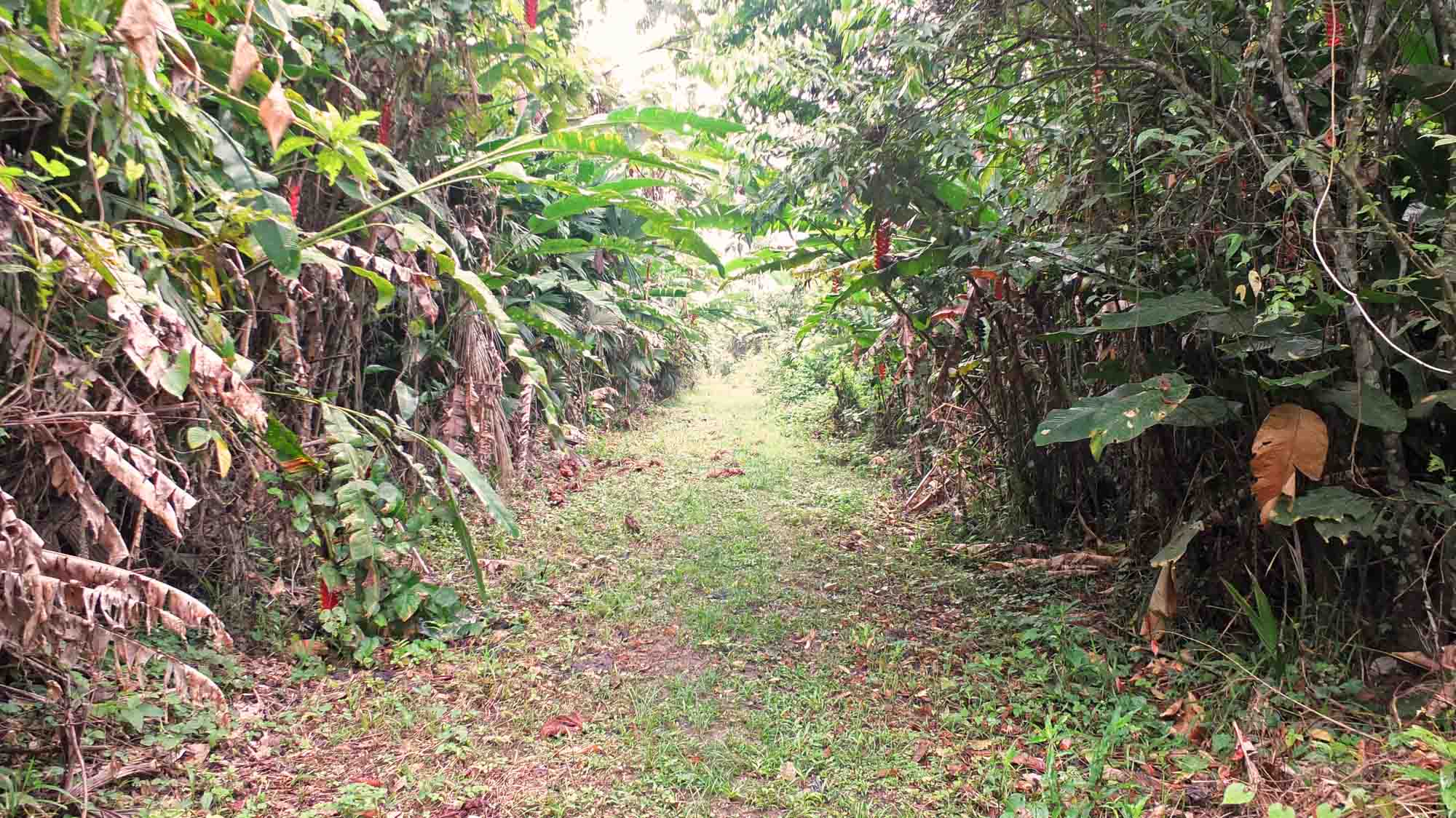 I was getting closer to Yasuni park, the reason I came to Ecuador.
From Riobamba I traveled to Tena where I stayed with a really nice family, had some very good food and interesting conversations.
My original idea, to use the river Napo to get to Coca, turned out to be naive. The river is way too shallow to navigate.
Therefore I had to use a bus again. The journey was not so long and actually quite pleasant.
In Coca, (also known as Puerto Francisco de Orellana) I booked into a hotel and then went to the river to find a way to get into the nearby park. There were some boats moored and I asked the people who were busy loading stuff.
'Boletos alla arriba!' (Ticket's up there!) they pointed.
This office only sold tickets to go direction Nuevo Rocafuerte. They advised me to go to the tourist office. Now that is something I hate but Ok.
At the tourist office, a friendly lady gave me a map of Yasuni and told me I need to contact a tour operator.
This I hated even more.
There were a few of those tour operators in town and their standard prices were about 500+ dollars for 3 days including accommodation, food, indigenous dances, fishing and pink dolphins.
This is way too expensive and confirmed my opinion about tour operators.
Not only because I am stingy but because most parks around the world are free.
In some countries they do charge a modest fee to pay people to keep track of visitors and collect the odd bit of rubbish .
Back in the hotel I met a Dutch woman who'd forgotten her Dutch because she lived most of her life in North Carolina. She had just come back from a 3 day trip to the Yasuni Park for the outrages amount of 600 dollars.
'I was all alone. There were no other tourists!' she said. 'But it was nice. Some indigenous people came to the hotel and danced for me.'
Obviously, I was not doing that! 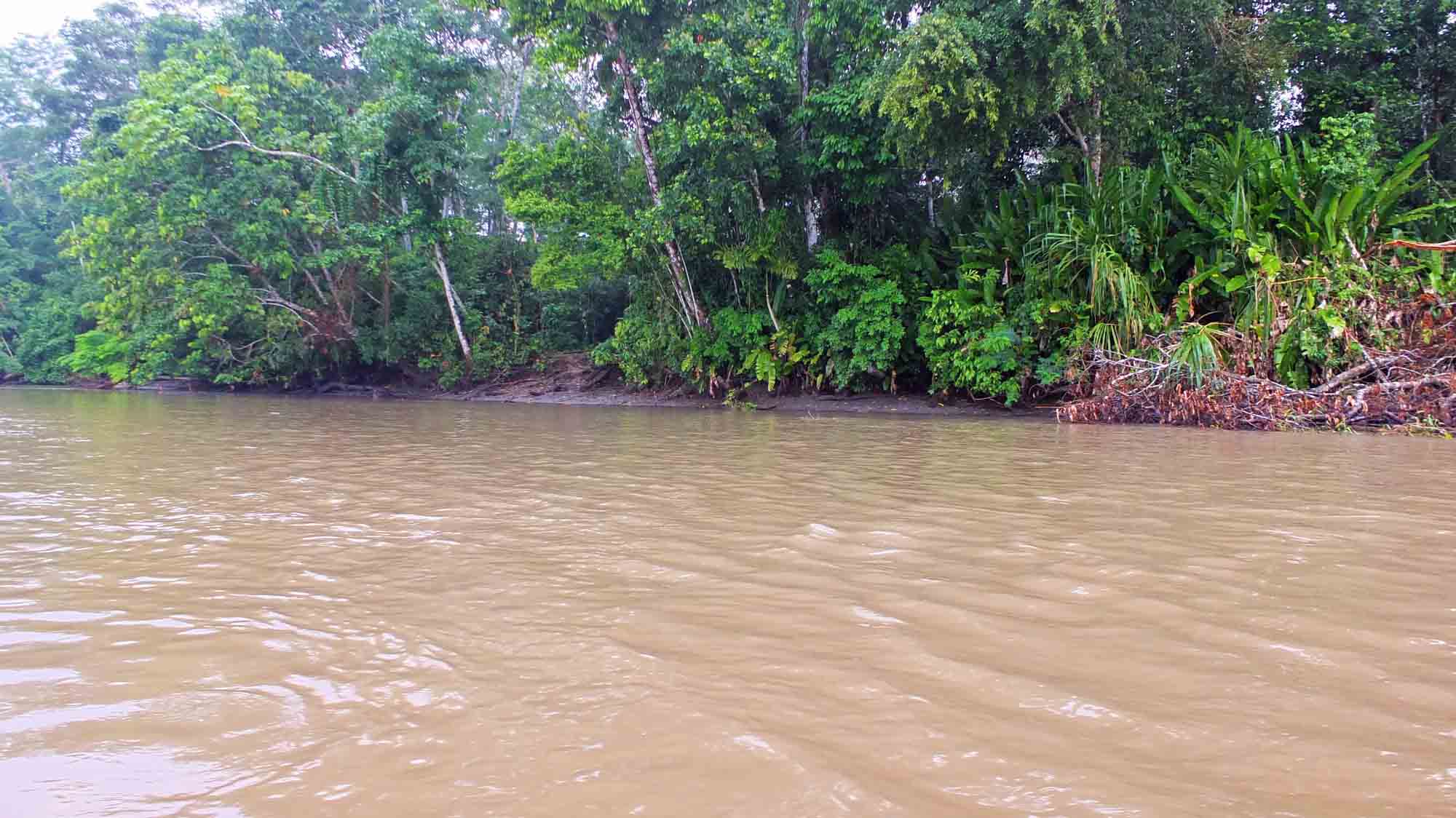 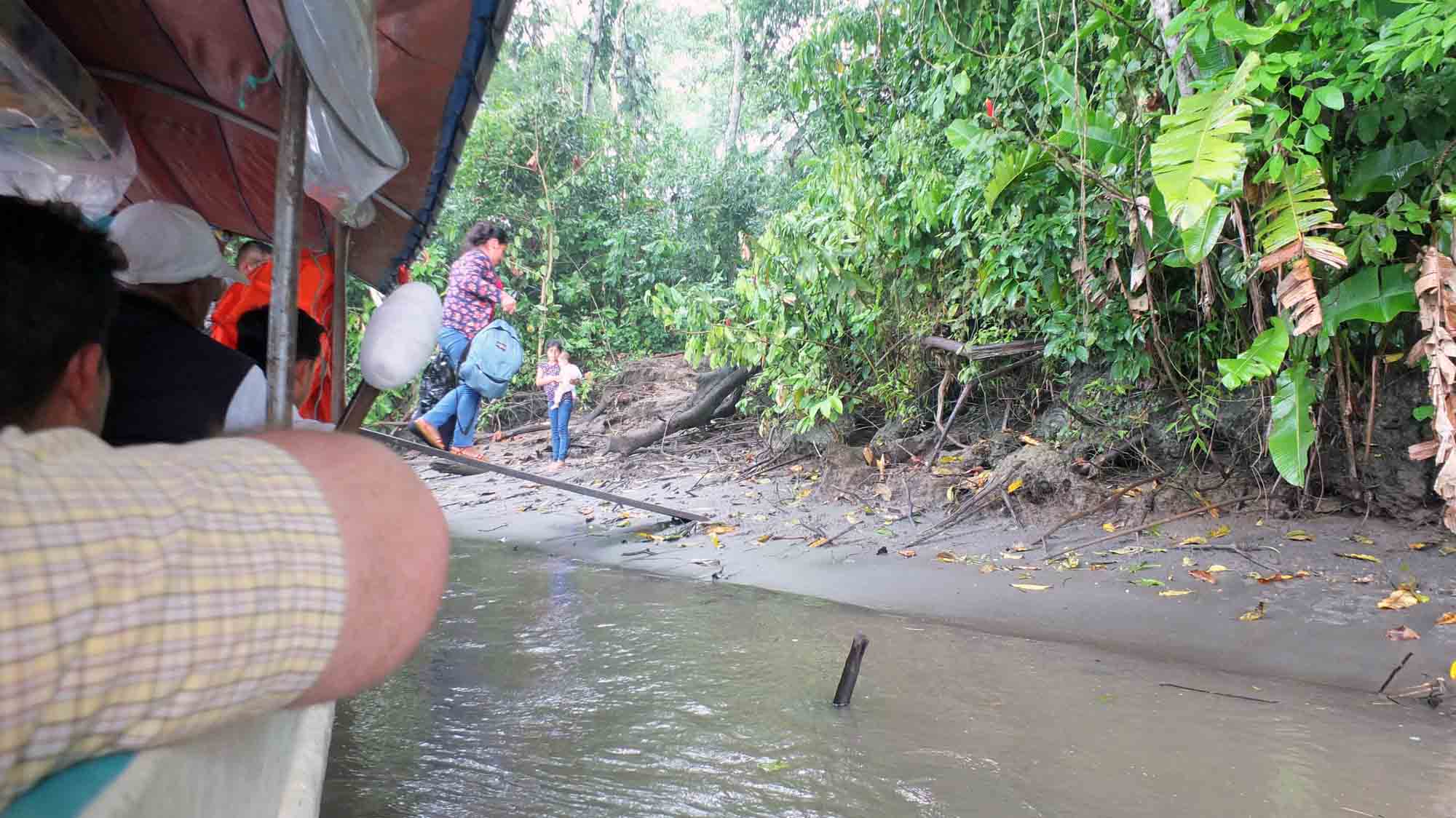 I decided to try my luck in Nuevo Rocafuerte, which is the last town before the border to Peru.
The canoe shaped boat, carrying about 50 people, left at 7.30am and floated right through the Yasuni area.
On the boat I sat next to Pancho, who worked in a laboratory for tropical diseases and Sergio, a bee-keeper from Chile.
Pancho lived here all his life and taught me a lot about the river. He was on his way home and only stayed with us part of the way. Just before he left he mentioned that the entrance to the park is free!
Sergio was on his way to Peru and shared some apiarists secrets. All in all it was a pleasant journey through a fabulous part of South America. 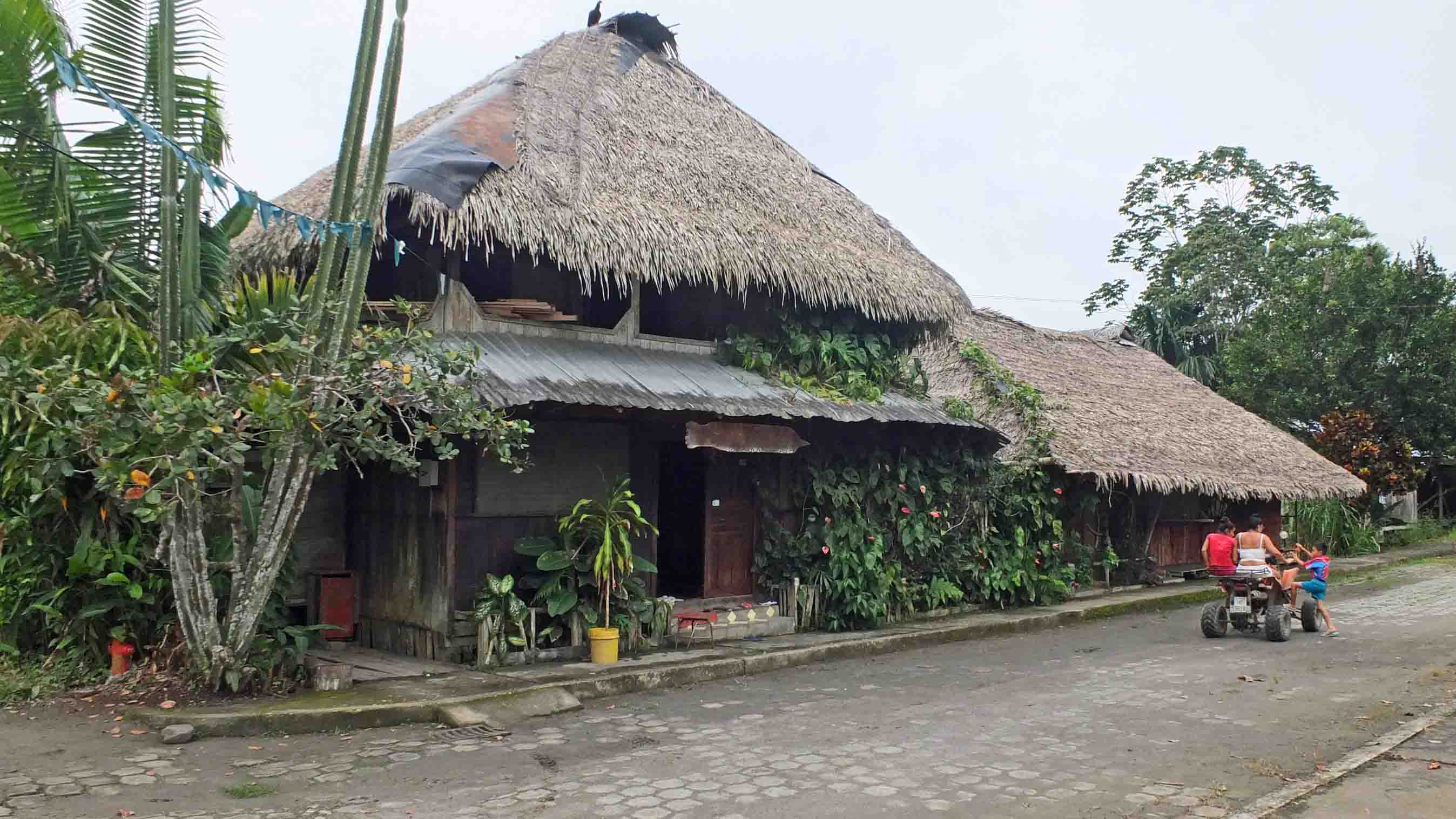 We arrived in Nuevo Rocafuerte at about 3 o'clock in the afternoon and started looking for accommodation immediately.
Since there were only 2 streets it didn't take long.
We found Casa Oropendola and Sergio took the only room available. He was planning to leave next day.
The landlady, she called me 'Mi Señor' (My Lord) gave me permission to hang up my hammock under the roof outside.
The bee-keeper managed to organize transport to the neighboring country with one of the traders who come up from Peru to sell their goods and therefore needed to get his passport stamped. So we went to find the migration office which -of course- was at the opposite side of the village. After a 10 minute walk we found it closed. A friendly neighbor advised us to bang at the door. A sleepy man in underpants opened and said,
'Migracion?'
We confirmed, waited until he got dressed and 10 minutes later Sergio had 'checked out'.
He spent the night as an illegal. Next morning he left for a 2 hour journey in this tiny canoe to a village called Pantoja in Peru. 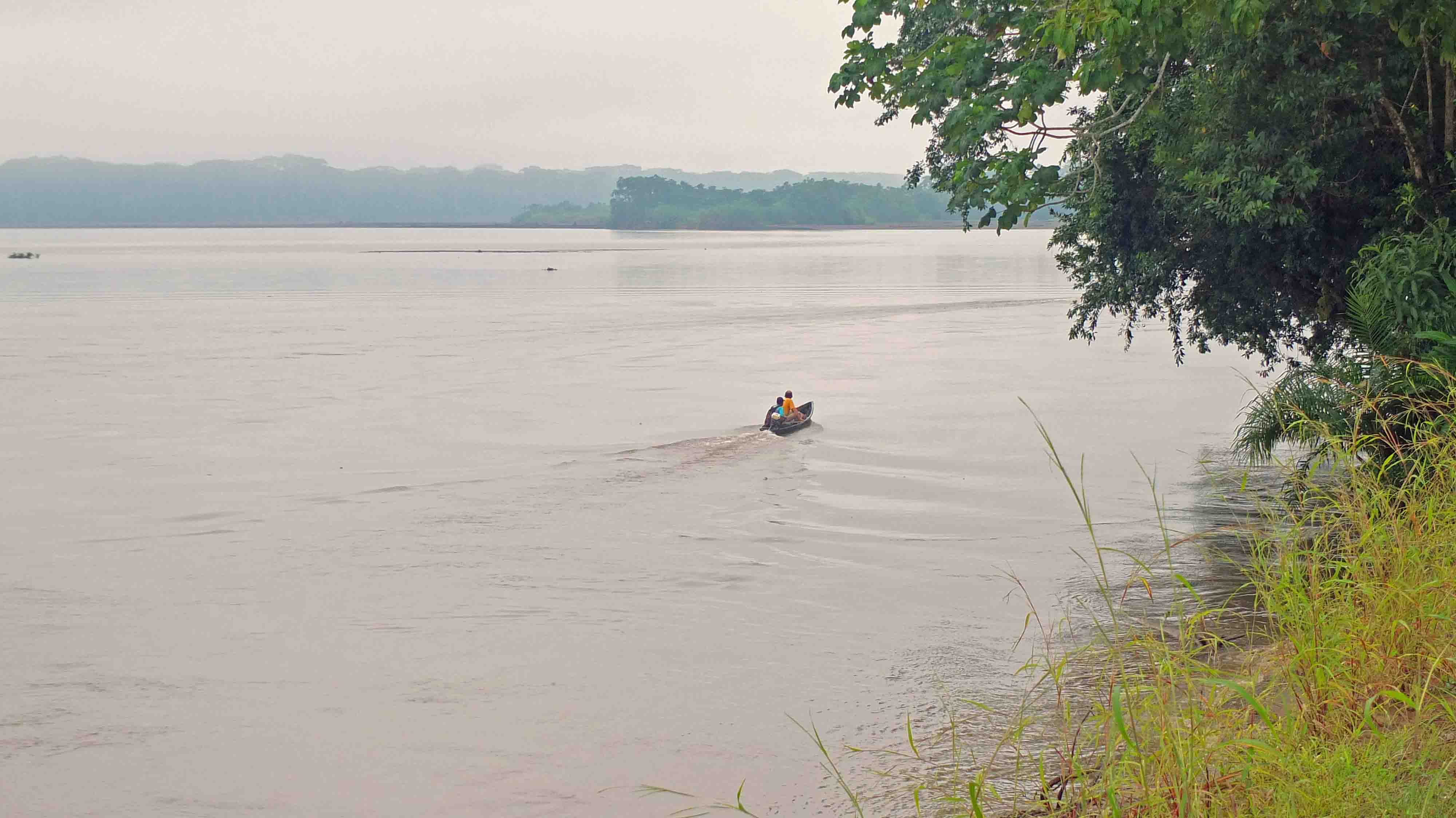 I went direction park. I met some people and asked for confirmation. I was told, 'In frente!' (In front – everything in Ecuador is always in front, never left or right)
Happily, I walked on. Life is good!
After about an hours walk I was stopped by an armed soldier in full uniform. He told me this land was government property and I need to turn around and walk away.
I tried to argue but he insisted.
On my way back I met a woman and asked her if there is another way to the park.
She said, no this is the way! I informed her that the soldier didn't let me pass.
'Si, a veces esto pasa!' (Yes, that happens sometimes)
My guess is they work with the tour operators.