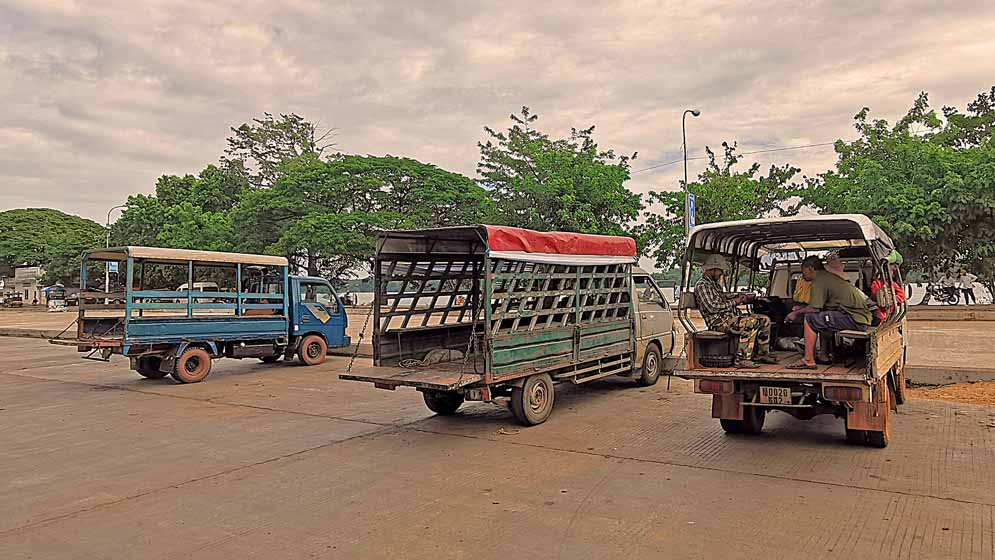 Travelling in South East Asia is rather different than anywhere else in the world. As a tourist you probably get your tickets from a tourist office or a local travel agent and therefore are forced to use a so called Minibus or a VIP bus. There is no real difference, they are both vans. The VIP option is generally a little more expensive (it's VIP you know) but not necessarily better. These minibuses go -most of the time- directly from A to B and don't stop (hardly ever) for anything. The disadvantage of this kind of transport is, you don't really know when it sets off. They have the best intentions of course but If the van isn't full the driver won't leave. It might take an hour (or five) to fill a van or for the driver to give up hope of getting any more paying customers. Also, what the locals consider full I call cramped. That's why I prefer alternative or more original means of transport.

The Song Tao (meaning 2 benches) is one of my favourite vehicles. It's a small lorry with two benches on the back as seen in the photo above.
These things leave on time but stop for anybody, anywhere. They have a fixed route and people wave to get on or bang on the roof to get off. It's cheap to use but if you're planning to go a long way this might not be the most convenient method. However, it's very entertaining and one learns a lot about local customs.
The Passengers are mostly locals and usually carry a lot of baggage. But not always, sometimes there is baggage but no passenger. You might feel obliged to help someone load bags of rice or baskets full of live chickens. They will never ask for help of course but that's how you can make contact. Another one may heave a dozen jack-fruit (those are huge) and/or a toilet bowl onto the back of the lorry but then doesn't get on himself. Or you might be asked to move over a little and make space for a tied up pig or hold a baby while the mother disappears in the bushes for a pee. Literally anything can happen if you travel in a Song Tao. 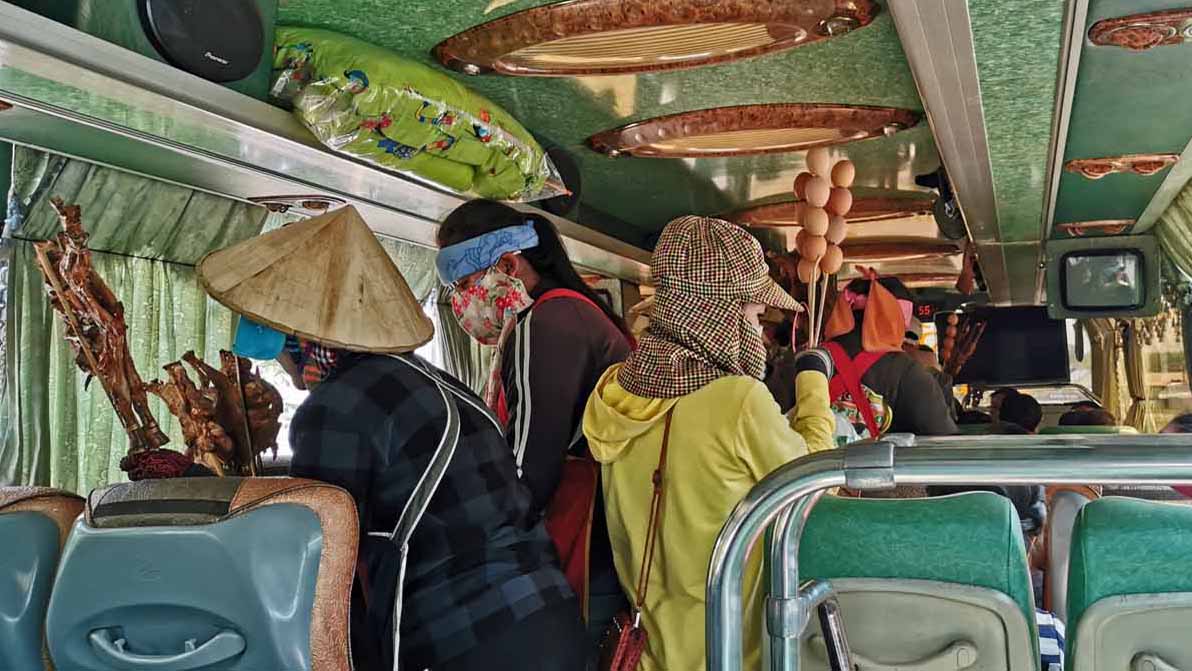 Then there are Local Buses.
Local Buses are 'normal' buses which set off on time and stop frequently but they may have airco and/or play music or movies. This is not necessarily a good thing. The locals like their airco and entertainment at full power which means, by the time you get to your destination you may have a cold and gone deaf.
Also, at every 'official' stop hordes of food vendors storm the bus, selling barbecued or deep-fried chicken, eggs on a stick, coca cola in a bag or sticky rice wrapped in a banana leave. I recommend caution. The food can be nice but sometimes the chicken is still raw or the sticky rice is a left over from last week. If you're lucky they offer Khanom or cake usually shaped into balls and made of coconut, almonds, sesame and dough and their texture and flavour resembles marzipan. Those cakes are very sweet and extremely tasty. 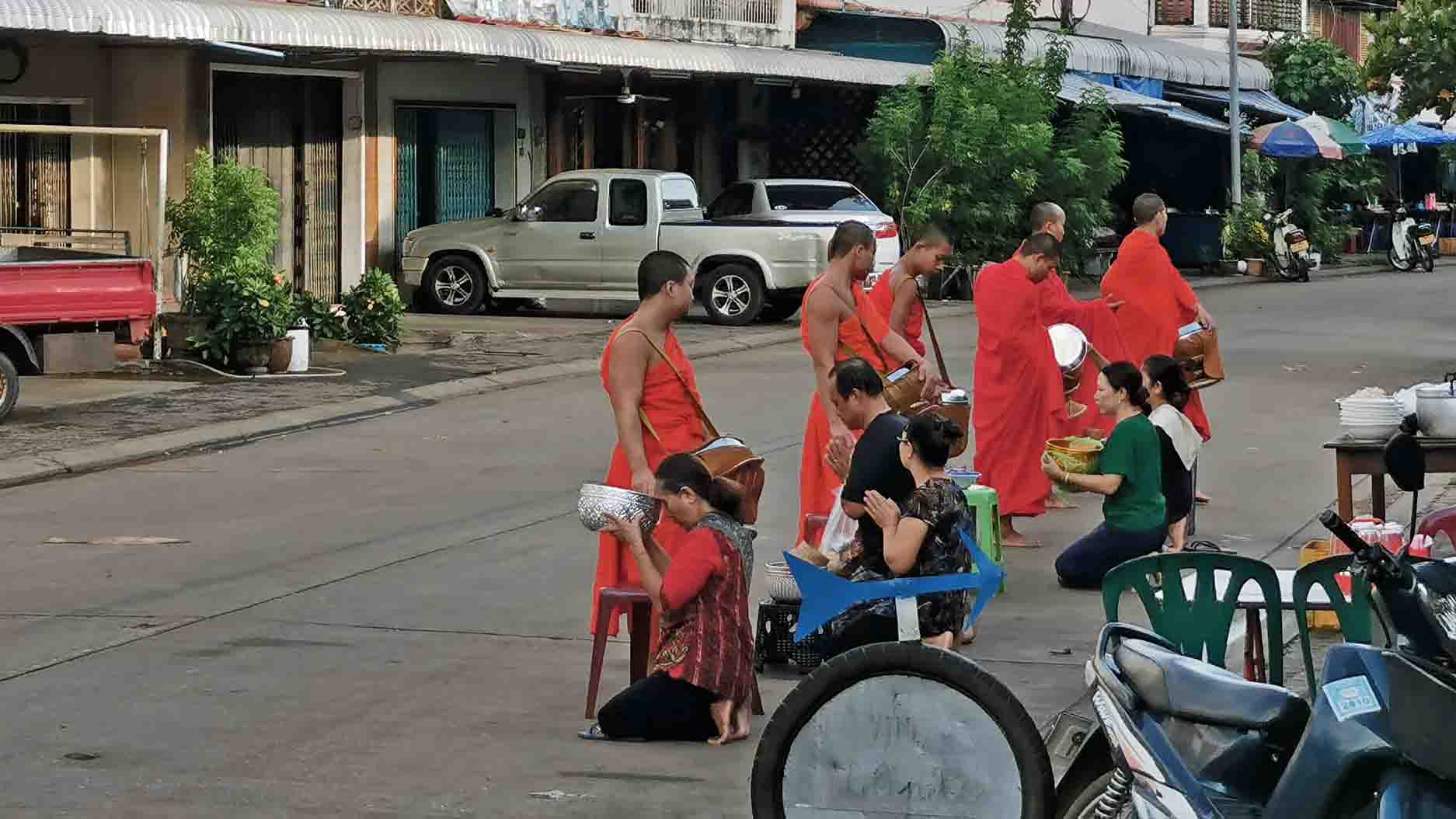 Going direction Cambodia, Pakse is sort of half way between Thakek and the border.
Pakse is a small town with no apparent center. I did ask people for the center and was told I am in it. But the coffee is really good, like everywhere in Laos.
Having coffee and watching the monks doing their early morning walking meditation is a nice soothing way to wake up.
Traditionally monks weren't allowed to talk during their walking meditation but then people started to give them worldly goods (like food, cigarettes, phones, tablets, washing machines, money etc.) and asked for blessings in return.
Over time it became a walk of collection rather then meditation.

Thakek is a small village by the Mekong river in southern Laos.
It's very hot and nothing much to do except wait for the sunset which is usually quite stunning and a good photo-op.
But a lot of tourist (20-40 a day) stop off here. Why?

There are many hills and small mountains in the surrounding area. A lot of these mountains contain hidden caves, some are quite large. The town has advertised this by creating a tourist attraction called 'The Loop'. The Loop is a route of approximately 400 kilometer,

leading tourists in a giant circle passed those caves, stopping off at conveniently placed guest houses. One needs to rent a motorbike for about 4 days, which is what it usually takes to see all the caves (I think there are 9) and come back to Thakek.

The road is not bad but one needs to watch out for loose goats, cows, horses and water buffaloes.
I rented a bike for a day and went to the first cave. It took about 2 hours to get there but very soon I felt the burning sun on every exposed bit of skin. Luckily, I had found a helmet big enough to fit my skull so my brain didn't fry.
They charged me 30000 kip (about 3$) to get into the cave area.
There was a coffee place, a restaurant and a souvenir shop. I ignored all that and went straight, passed the artificial waterfall, into the cave. Some fancy lights guided my path.

I am not a cave man i.e. I don't like confined spaces. The increased humidity didn't make this place more attractive. There were options to rent a boat and go deeper but I'd prefer a boat on the open sea.
30 minutes in that cave were enough for me. Then I had a coffee and enjoyed the country side some more. 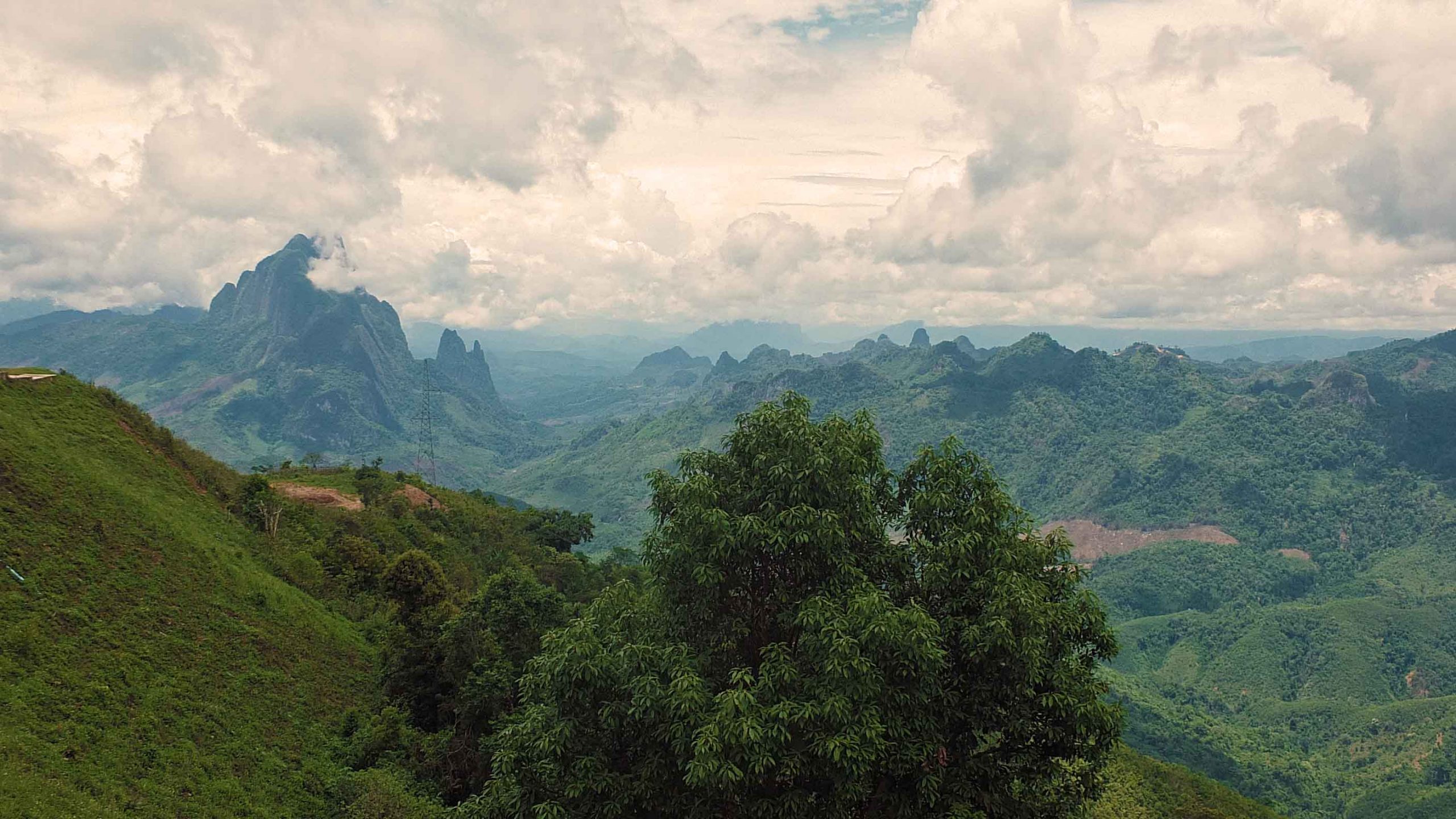 Visiting Laos is like going back in time.
It's a magic place with a population of only 6 million.
Also, it's the most bombed place on earth. The US waged a so called 'secret war' against this country and lost. The result, craters and unexploded bombs are everywhere.
All this happened in the 60s and 70s. The country's been under 'communist' rule ever since

I arrived in Phonsavan by bus. The journey took about 10 hours. Nothing interesting happened on the way there, except the countryside of course, which is stunning and absolutely gorgeous.

Recently this place became famous because there are huge jars scattered everywhere and nobody knows why. 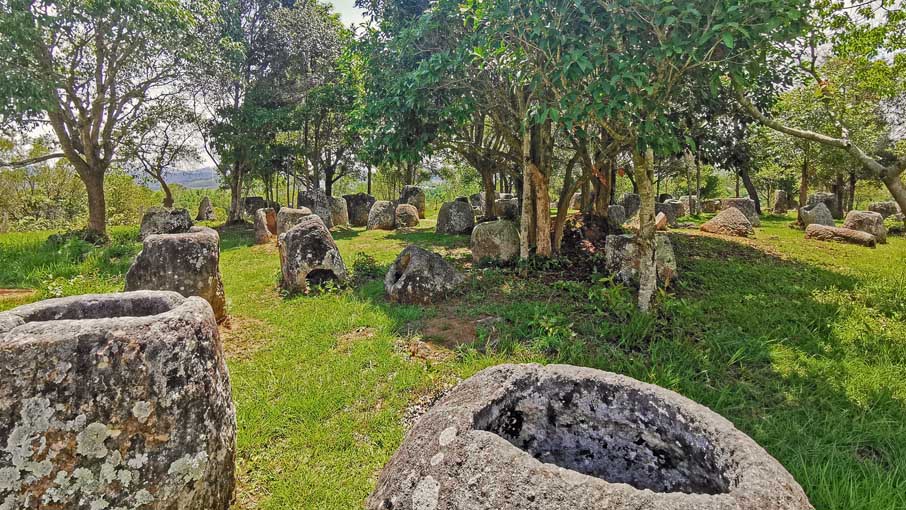 They're about two thousand to 2500 years old. Who build them and why is open for discussion. Luckily those jars didn't get damaged a lot, by the massive amount of bombs dropped onto the country.
Over the years many of those bombs were found and disarmed. The locals use them now for decoration. 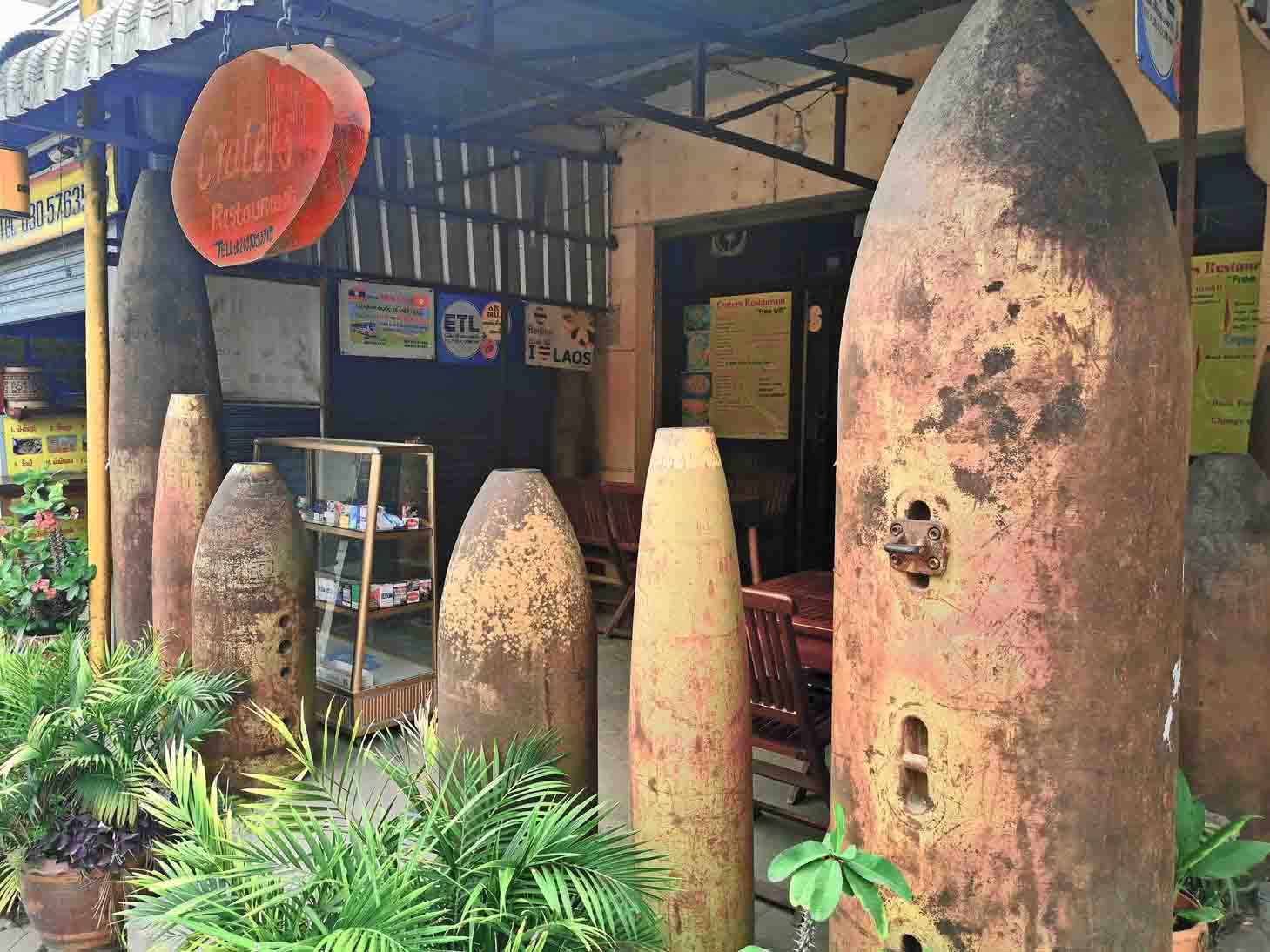 But there is an unidentified number still out there, undiscovered and armed.
The Obama administration gave a few million dollars to Laos to clean up. Other countries did, too.
I met some people involved in this, foreigners working as advisors for different organizations, helping to clear the area. One of those guys gave me the below video and permission to publish it. This is one way of disarming a bomb. Not the one I would chose but it sort of shows the blasé attitude of the people who grow up with this danger.

Phonsavan is a quiet place. There is not much going on. I visited the local market which is probably a bit shocking to western eyes. They way they sell live stock looks seems a bit cruel.

Next I visited Vangvieng, a town made for tourists. Laos is a landlocked country. But here are many rivers and of course it's always warm. How does one attract tourists?
Organising mountain climbing, rafting, and buggy mud races seems to be the way to do it. One can rent a buggy for about 15 euros an hour and go mad.

Vientiane, the capital appeared to be more interesting, I thought.
It's right by the Mekong and offers food from all over the world. It's also expensive for Laotian standards. You will find it difficult to get an original 'Café Laos', brewed in the traditional way.

Italian Espresso machines are everywhere. An espresso cost about 3 to 4 times as much as the local variety.

The museum/temple I found during my morning walks was nice.
10136 Buddha statues, rescued from various parts of the country are gathered here. Some are huge, others are tiny. They surround the still functioning temple in the center.