Technically Sarawak belongs to Malaysia. However, it is quiet different to the rest of the country. I spent a lot of time in this beautiful place and still visit it as often as possible.
You have to fly through Kuala Lumpur  to get here but you get an extra stamp in your passport on arrival. I love the mixture of sophistication and raw nature. It is difficult to believe that these incredible friendly people used to be the original head hunters. They still like to live in Longhouses i.e. in large communities. 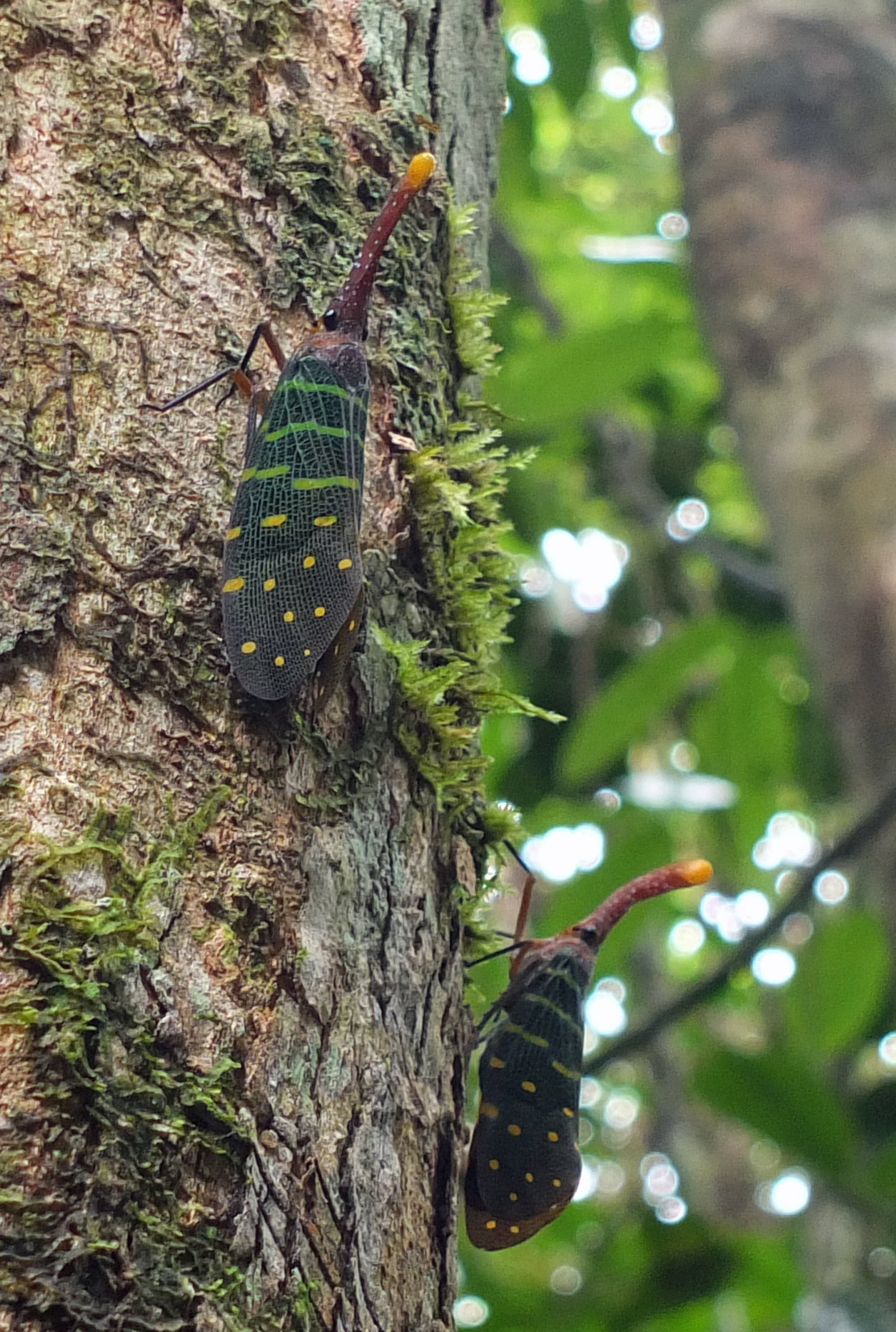 Over the centuries people from China and India and of course, the Malay moved here, too. With such a variety of cultures tolerance is of the essence.

Borneo's nature is spectacular. This cicada is very unique and only exists here. I like to call it the unicorn cicada for obvious reasons. While I was taking this photo a jumping leech leaped onto me and sucked my blood. I never felt a thing. It let go when it had its fill but my blood did run for a while and messed up my shirt. 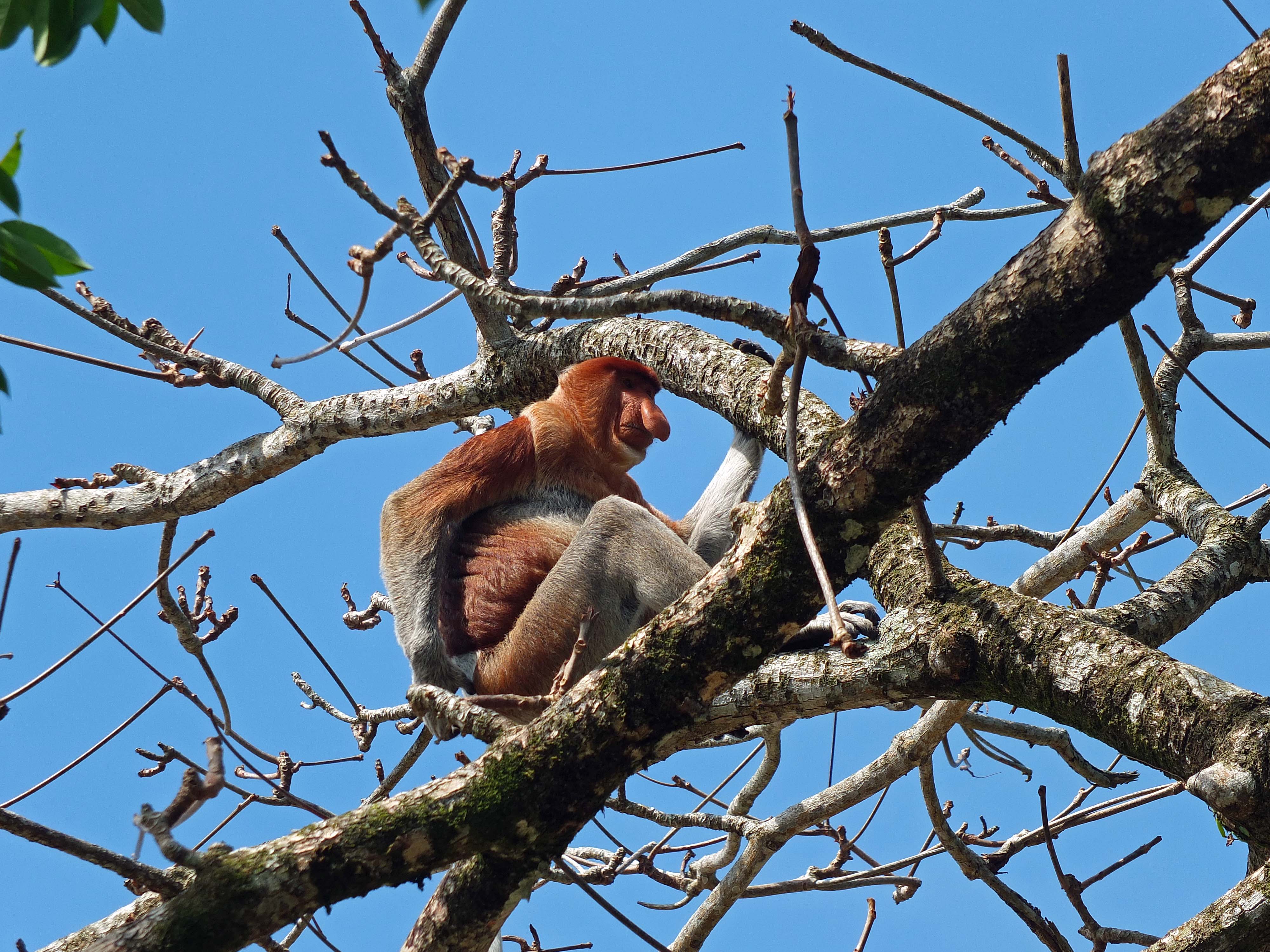 The nose monkey or Orang Belanda is a native to this island. It is big but quite shy. The huge nose identifies this guy as a fully grown male. In his world size really does matter, as in no nose, no mate. The locals call it Orang meaning human or people and Belanda (comes from Hollanda) means Dutch. When the dutch passed by here and the natives saw their big noses and fat bellies they saw a clear resemblance. 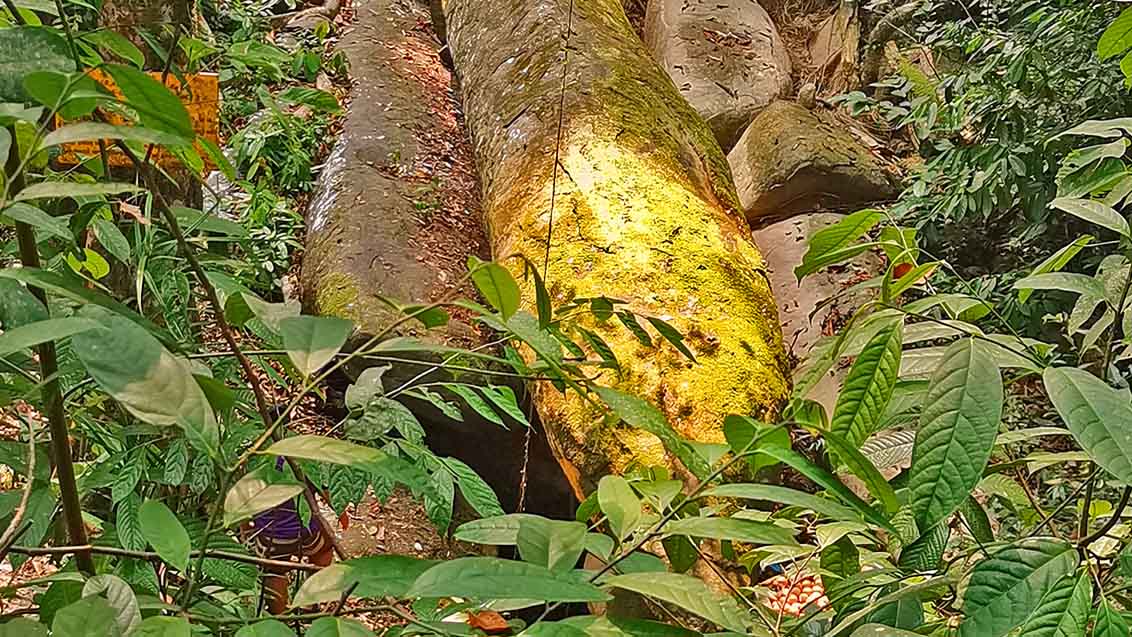 I went to see a god!
It wasn't in a church. I didn't go to a temple or a mosque and I didn't visit a synagogue.
This god lives in the jungle.

He's been around for a long, long time. She or It (not sure about the sex of this god but I'm guessing it's a him) doesn't need to call out to its disciples or remind them to worship. They come when they feel the need to talk and they bring presents.

Nowadays, it's a relatively short walk from the main road -where we left the car- to the home of Batu Nabau which is what the god is called. It's been living there, on the same spot, for a really, really long time; in fact nobody knows how long. Nobody knows how he got there. But gods work in mysterious ways.
A friend had told me about this god and naturally I had to see her.
Of course, the path is quite narrow, as it should be and then just before we reached the deity, a final warning.
'Don't ask for luck. Only worship and beg for health'
A little bit further and lo and behold there it is, glowing brightly in the dark jungle (illuminated by the sun shining through a gap in the forest canopy), a giant stone, about 9 meters long and 2 meters wide with a pointy end.
The locals say it is reminiscent of a snake. It depends on how your mind works, I guess. To me it looked like something else. Nevertheless, as stones go, this one has an odd shape. Maybe it's a petrified tree or the weird side effect of a volcanic eruption. Below this god are a few more pillar shaped stones, but much smaller. Once upon a time they might have been one piece but then something happened and they broke apart and now they form the base of a deity.
Worshipers had sacrificed a cock to please their god. Others had brought eggs and spirits. There are some cigarettes and whoever left them didn't forget to add matches to the offerings. Also, noodles, rice and biscuits have been left for her lordship. Someone even left a little cash.
Before you say anything, consider the following.
This is not the official depiction of a man being executed or the image of a fat enlightened or thin and sexless thinker and philosopher. It is however a place of contemplation and inner peace. Standing here, next to this adored giant stone, gives me a better understanding of religious devotion than any organization ever provided. There are no rules because there is no need for rules. The simple fear of the unknown and a sort of irrational desire to connect to it and try to appease it, gives the worshiper strength to go through life.
Isn't that what happens in all religions? Isn't that what religious and political leaders exploit?

People came to this stone long before James Brook came to this land or A. R. Wallace started writing about species. They probably came to this place before Columbus started his infamous journey. People worshiped this god before Genghis Khan started conquering Asia or the Romans 'civilized' Europe. They may even have knelt before this stone before the Egyptians started building pyramids. 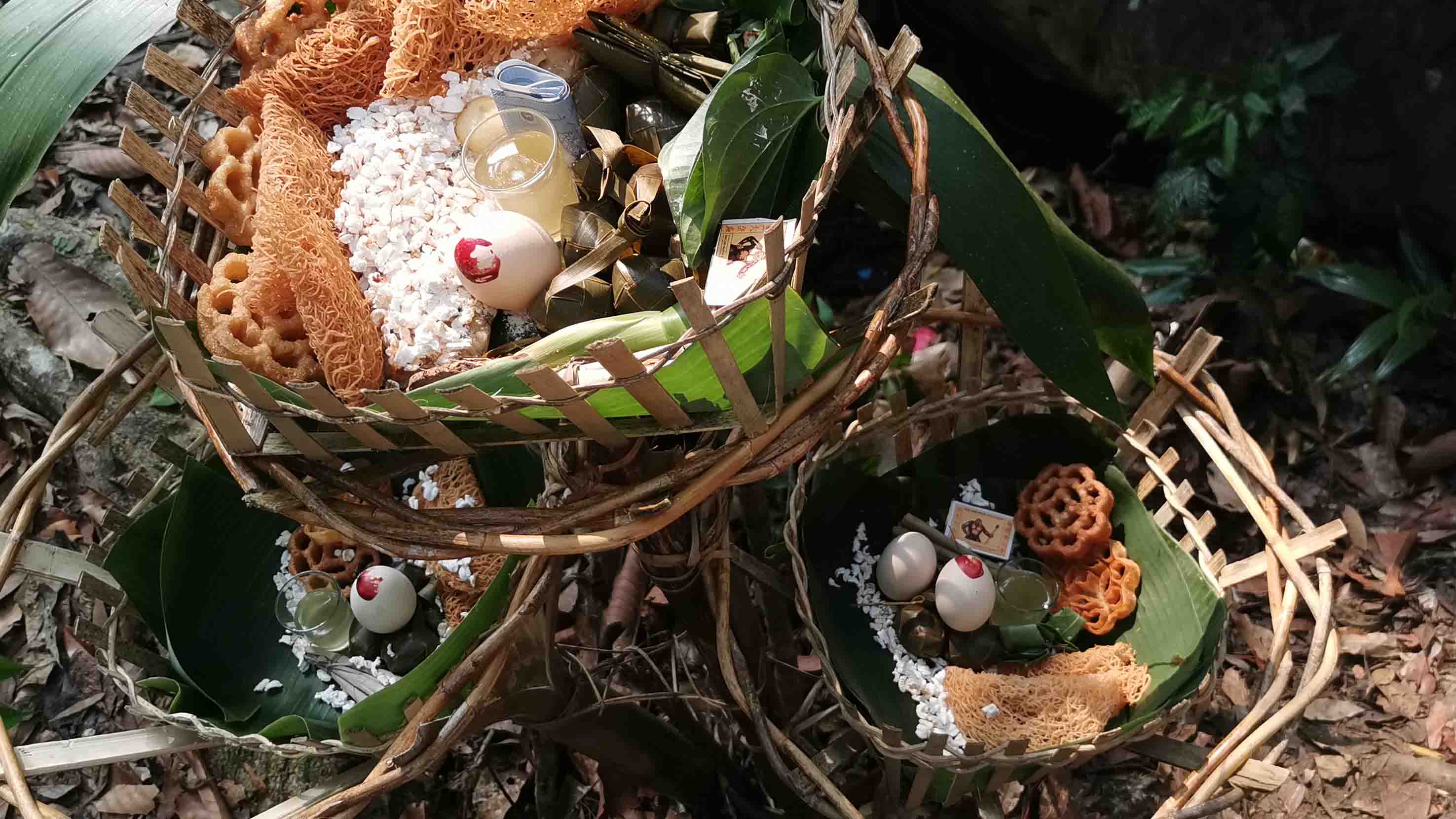 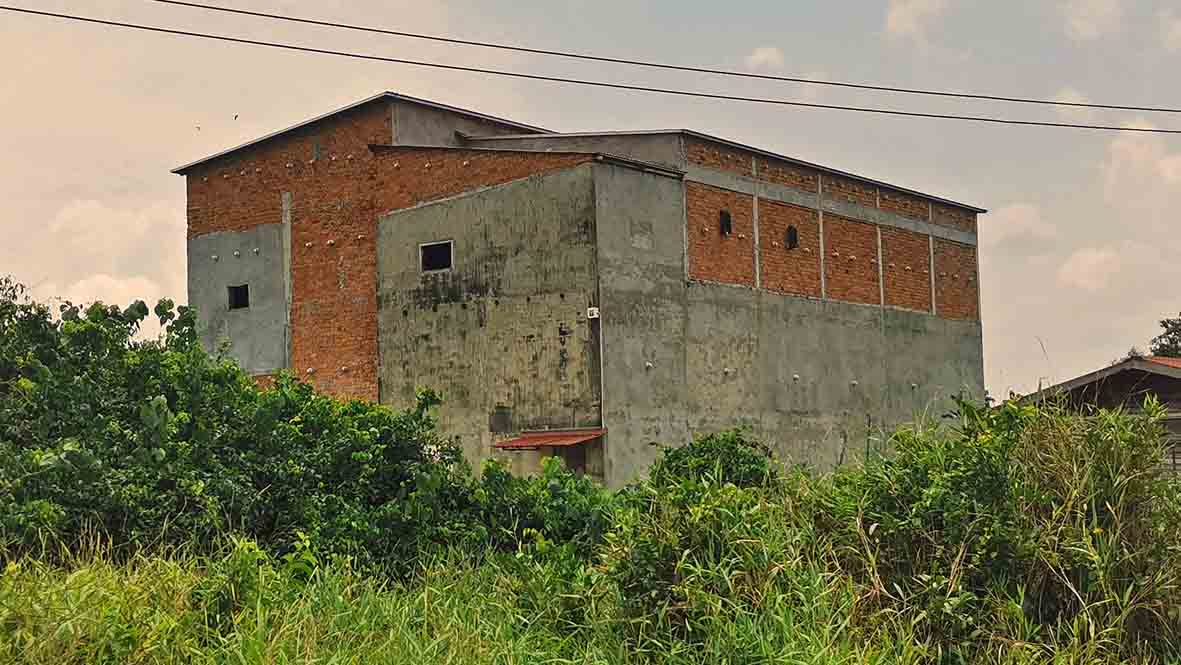 Finding a suitable accommodation is serious business. It doesn't matter if you're travelling and looking for a short stay facility or planning to settle down for a longer time, you want the place to be just right. Borneo might be the place for you if you are a bird, a swiftlet to be precise.

Let me explain
The swiftlet is a tiny bird which lives in South East Asia. It looks a bit like a tiny swallow but is related to the hummingbird. Their super power is echo-location i.e. they can 'see' in the dark. They also use their saliva to built a nest which is a kind of cool ability to have.
But the swiftlet has 2 problems.

No.1 It can't just spit at a wall and there 'll be a nest. It needs to spit many times, at the same spot for several days.

No. 2 About 500 years ago some guy decided to put some bird's spit in his soup and liked it. This man was Admiral Zheng He

Admiral Zheng must have been a marketing expert. He told people, eating bird's nests gives you energy and is good for your skin. And we all know, when it comes to appearances, people are prepared to pay ridiculous sums.

What made it even more interesting (and expensive) was the way to get these nests. People crawled into caves and climbed long bamboo poles to get to those spit balls because somewhere was a person with an inferiority complex and too much money.
Vanity thou art an evil bitch!

But that was then. Nowadays people are more pragmatic, more inventive and more devious?

They studied the bird's behaviour and learned how to mimic the perfect nest-building-conditions. It requires dark and humid spaces which are slightly ventilated (but not too much), with beams made of the swiftlet's preferred wood to which they can glue their nests and a luring soundtrack to advertise the location.

It works.
The birds are happy to build their nests in the provided facilities.
While they are out, workers sneak in and steal the nests. The poor birds are slightly irritated by this, but because the females are expecting, they quickly start spitting again and makes a new one.
To guarantee a steady supply the egg-holding-nests are not touched, obviously.
Then the 'harvest' is cleaned and sold. 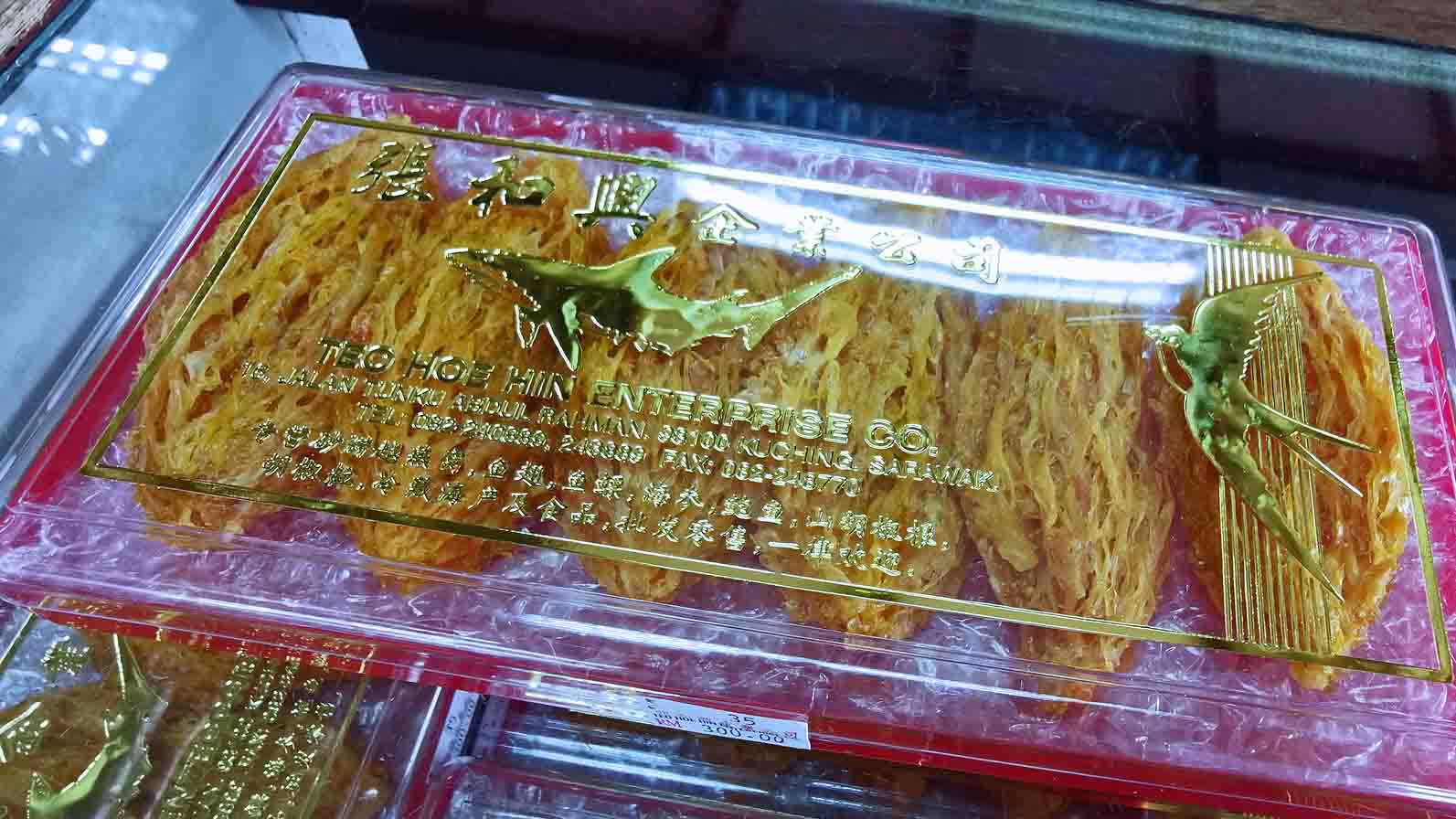 All of this for some bird's spit, you may say. Well, yes! The spit is sold for ridiculous amount of money. See the yellowish box with the golden writing? It contains 30 grams of birds nest and cost €75. That makes birds spit the most expensive animal product on the planet.